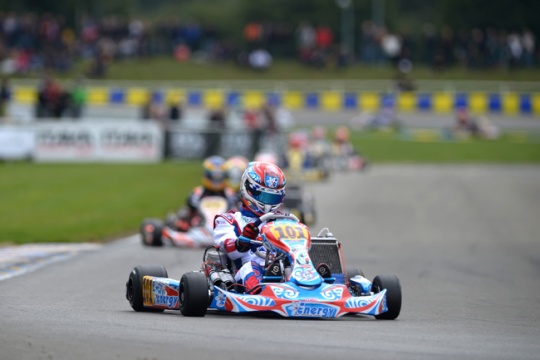 Press Release by: Energy
European Champion and now 2nd in the "World Cup" (CIK International Super Cup): Joel Johansson and Energy Corse are definitely the big winners this season in KZ2…
... a category with no fewer than 96 drivers entered on the Le Mans International circuit on September 11th-13th. Despite changing weather conditions which were difficult for all competitors, the Italian team worked intensely and effectively work on French soil to allow Joel Johansson to come back from 47th to 2nd place. A special ascent to enter in the annals of Karting!

In France, the Energy Corse Team experienced every emotion. Satisfaction to disappointment and determination to joy. In any case, he never gave up. The qualities of the technical staff and equipment have been rewarded with a great global performance. But it was not easy. "We did an excellent job during free practice. Many of our drivers were among the fastest on the track," commented Mick Panigada, team manager, on Friday afternoon. However in the official qualifying session, many favourites were surprised by the combination of specific adhesion on the Le Mans race track and the quality of the tyres. Although there had been some predictions, few would bet on the order of the time trials continuing.

Victory in the prefinal
Although the Lithuanian Rokas Baciuska and the Briton Sean Babington were only a few tenths from pole, Joel Johansson, Jon Tanco, Marco Zanchetta and Juan Correa were in mid-table, and Adam Maatougui alas further back. The qualifying heats would not prove to be a bed of roses for Energy Corse, with incident thwarting the progress of powerful drivers on multiple occasions. Nevertheless there were several top fives, including those won by Babington, the brilliant winner of a race on Saturday. For his part, Joel Johansson managed his five heats perfectly. He managed to go back to 16th position. He confirmed beyond even his expectations in the prefinal 1, he won brilliantly on a wet track, with rain tyres.

The expertise of the team
The line was dry again for the final and the set-up chosen by the team was particularly effective. From the start, Johansson and his Energy-TM found themselves under pressure from the chasing pack but resisted adversity. The leader took the opportunity to get away, while Johansson managed to get on his own in 2nd position. This is where he finished. "Certainly 2nd is a taste of victory," admitted the Swede after his magnificent performance. "47th in qualifying and finally Vice-Champion, it is a great performance! I thank the Energy Corse team for their work. It really does have the spirit of competition and the incredible craftsmanship that characterises the big teams. Two months after the European Championship, it was another achievment. It's awesome!”

Note that at Le Mans, the Energy chassis was the fourth best represented in KZ2, a total of 25 entries.