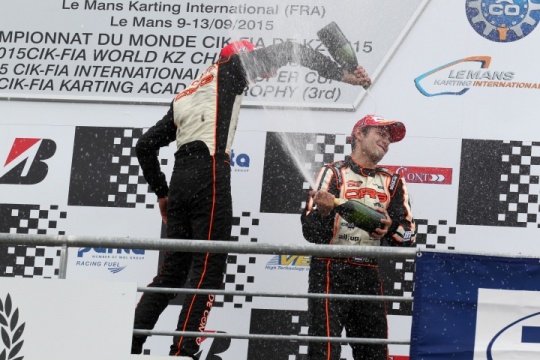 Press Release by: CRG
CRG secured the 12th world title in the shifter categories and the 39th inclusive in direct drive at Le Mans. The Italian outfit is now hunting the 40th world title next 27 September in La Conca's KF World Championship.
CRG reached level 12 CIK-FIA world titles won with the KZ World Championship held in Le Mans. In total the Italian outfit won 39 titles in the direct drive categories, improving further the prestigious prize list that started back in 1984 with Gabriele Tarquini in Sweden at Axamo and that, ahead of Le Mans, previously stopped to 2013 with Max Verstappen winning in France at Varennes.

JORRIT PEX, THE NEW KZ WORLD CHAMPION
In 2015 CRG chassis has been taken to the victory of the KZ World Championship by Jorrit Pex, the 22 years old Dutch from Roermond, expert in marketing and communication, Jos Verstappen and CRG President Giancarlo Tinini's pupil, who competed in Le Mans with his own team Pex Racing as did his younger brother Stan who raced in KZ2.

This title of World Champion did not come by chance, despite the appointment of Le Mans was in one round only, and was at times spoiled by rain and therefore everything could have happened. Pex just missed this important win: “Most of my life is great fun – said Pex before winning the world title –  and we are all (meaning my whole family) committed to get the success in KZ1”. Well, now Jorrit obtained that success once again on CRG-Tm and we are sure that this is not bound to be a one spot, this is certainly the first World Championship and some others will come.

PAOLO DE CONTO, VICE-CHAMPION WITH HONOUR
Another driver also deserved the KZ world title in Le Mans: Paolo De Conto on CRG-Maxter, but the Italian paid the price of the melee that took place at the last lap after leading the race from lap 3 to the 21st of the 22 scheduled loops. Despite the Champagne on the podium, De Conto still has a bitter mouth. Being Vice-World Champion 2015 will give him further motivation for the coming season though.

“Obviously, from a personal level I am disappointed on how things ended  – said Paolo De Conto – as I believe I ran a perfect race. At the start I got the second place, then the lead and pulled away. Then they closed in, I am sorry, my mistake. The consolation prize is the success for CRG, a one-two at the World Championship is a great result!”

CRG HUNTING WORLD TITLE NUMBER 40!
The world titles secured by CRG so far are 39, as alongside the 12 world titles won in the shifter categories, KZ, KZ2 and Formula C, the Italian outfit also won 27 world titles in the direct drive categories. Next 27 September the circuit of La Conca (Italy) will stage the KF World Championship where Felice Tiene, also protagonist at Le Mans in KZ2 until the incident in the final heat on Saturday that put the word end to his French exit due to the consequences of that unlucky racing episode, will compete on CRG-Maxter.

“After the incident on Saturday at Le Mans, I tried to run the warm-up on Sunday morning – stated Felice Tiene during preparation testing ahead of La Conca –  but the pain to my left arm, back and right leg was too much. I could have not run the Prefinal and in case the Final. Luckily I did not break anything but the pain was just too intense. I am better now, I hope I can counter-charge in La Conca and win the KF World Championship”.