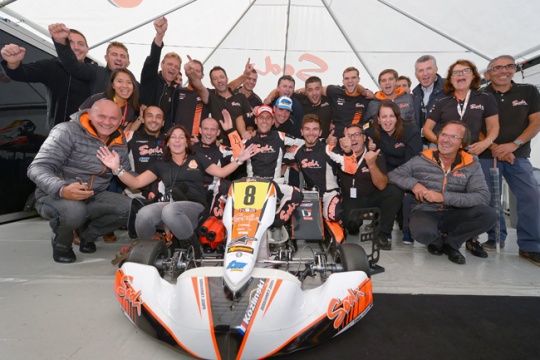 Press Release by: Sodi Kart
The 2015 World KZ Championship, held this weekend on the Le Mans International Karting circuit, brought rewards for the work done by Sodikart to return to the highest level of global competition.
Sodi had the satisfaction of seeing three of the four contenders finish in the top five of a notably tough meeting. Kozlinski managed to take 3rd place in front of Iglesisas and Lammers, while Abbasse, also in the game until then, retired with an engine failure. Several KZ2 drivers also had the opportunity to shine with Sodi in the International Super Cup and at the same time Henry Easthope won the British Championship for the second time in KZ1. Undoubtedly, Sodi is back to stay!

Sodi decided to strengthen its involvement in competition early in the season to demonstrate the full extent of its technical expertise. The entire company has invested in the project, the production unit as well as the race Research & Development unit, by creating a new racing service and with enhanced training with professional drivers.

Bertrand Pignolet, the director of Sodikart, takes stock of this new orientation: "We were convinced that Sodi did not get the recognition it deserved in competition. So we worked hard to demonstrate the quality of our race chassis. For the first year, the results are very positive: placing three Sodi drivers in the top five in World KZ is a great result that motivates us all to aim for big wins in the near future!"

Equipped with TM Racing factory engines, the Sodi boys were already on the pace at Le Mans from the free practice of the World Championship, but a bold set-up for qualifying didn't pay off. The team went back to work to make adjustments and move up in the rankings.

The Dutch champion Bas Lammers, a newcomer to the Sodi factory team, dropped in the heats after a wrong tyre choice between rain showers, then a track incident when he was back to 5th place. With his usual bravery, he managed to climb from 33rd to 16th place in the prefinal and then to 5th place during the final, one of the biggest achievements of the weekend.

Anthony Abbasse was the unluckiest of the team. 2nd in his first heat with the fastest lap, he was the victim of a blown engine in the second, but quickly gained six places in the prefinal. Unfortunately, a second engine problem early in the final prevented him from keeping going.

The CPB Sport driver Jérémy Iglesias was strong early in the meeting before ramping up impressively in the final, moving from 11th to 4th position at the foot of the podium thanks to the remarkable work of his team.

The best Sodi performance of the meeting was to the credit of Arnaud Kozlinski. The experience of the 2009 World Champion has was shown! Courageous in adversity, he rose brilliantly from 19th to 6th place in the heats. With fantastic starts, he took 4th place in the prefinal and continued his effort to finish 3rd in the final, an extraordinary performance at this level of competition.

"We had already had the opportunity to shine on a few occasions with Arnaud and Anthony early in the season, but the complete results at Le Mans is really our first big success!" confided Julien Dexmier, the Team Manager. "Nothing is better to cement a team and give everyone the desire to excel, especially as we felt that the whole company was behind us."

In the KZ2 International Super Cup, the current equivalent of a World Cup, Nicolas Gonzales (Sodi-TM-CPB Sport) managed a fantastic pole position in qualifying against 95 other contenders. Twice 2nd and once 1st in the heats, he was delayed by incidents and had to push to return 4th in prefinal 1. He also regained ground in the final and was fighting for a long time for 3rd position before being surpassed at the end of the race and finished 4th. Two other drivers brilliantly defended Sodi colours before being ousted in the final. The young Pierre Loubère (Sodi / TM) set the fourth fastest time and took 2nd place in his prefinal, while the experienced Charles Fiault (Sodi / Parilla) went up from 30th to 6th in the third heat and his prefinal.

Sodi is pleased to greet the second British Super One KZ1 Championship won by Henry Easthope this weekend at Shenington. The British driver had already been crowned U18 World Champion in 2012 with Sodi.