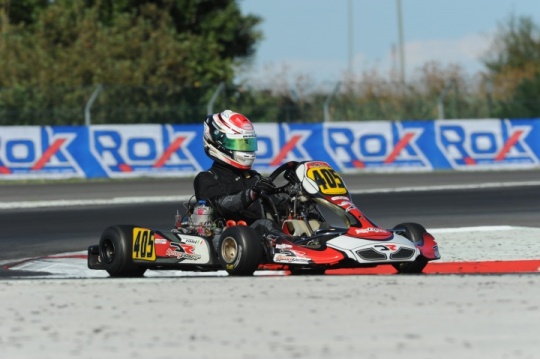 Press Release by: DR Racing Kart
Weekend full of glory for the DR colours thanks to New Force Racing team and Christopher Zani in the Italian Rok Cup, held on the beautiful Adria Karting Raceway circuit on 5-6 September.
A weekend that saw nearly 240 drivers at the start, and a very competitive grid also in Shifter Rok.

After a good qualifying with the 5th fastest time, and a first heat closed in 7th place with the fastest lap (48"969) to his credit, Christopher Zani found some difficulty in the second - closed in 11th place - which took place under heavy rain.
Good conditions returned in time for Sunday’s prefinal, in which Zani pulled off a great comeback from 10th on the grid. After a lightning start, in the first lap he made his way to 5th, in the second to 3rd, and by the halfway mark be grabbed 2nd, which he held all the way to the chequered flag.
For the final, the victory seemed almost a formality. Zani took the lead already in the second lap after a cautious start, his pace was impressive being the only one able to lap below the 49" mark and the win was his, with a margin of over 5" on the second.

Anything but a lucky weekend for Gabriele Bensi, who despite a good qualifying (3rd fastest), and a pace very similar to that of his teammate, was forced to retire four times - in both heats, pre-final and final - without ever being able to fight for the podium.


Christopher Zani: “It was a very tough weekend. On Saturday we began with a positive qualifying session, but the heats were a bit 'unfortunate, not least because of my mistake in the first while trying to overtake. The second, after a discreet start, went worse because it started to rain and we were not ready.
On Sunday’s prefinal I managed to close in 2nd, then it was time for the final: a lot of nerves and anxiety, but I had great confidence in my team, the material and myself. It was a fairly straightforward race, I pushed only the first three laps to build a good gap over the pursuers, then halfway through the race I saw Ercoli was approaching and I started to push again managing to keep my advantage until the end.
I thank my team, New Force Racing, my father and Danilo Rossi for the help they have given me and for believing in me.”