On the sun-drenched circuit of Genk, in Belgium, it was necessary to keep a cool head this week-end to clame the European crowns in KF2 (the Hopefuls category) and in KF3 (the Juniors between 13 and 15 years old). After having largely dominated their final, the Dane Nikolaj Moller-Madsen in KF2 and the Brit Alexander Albon in KF3 have added this prestigious title to their CV.

A European Championship is a competition which it’s necessary to manage carefully throughout. Between qualifiying practices and Sunday’s Final many things can happen during the Qualifying heats and the prefinal, which determines the starting positions for the only race that counts in the whole of the week-end.


Nikolaj-Moller Madsen (Enargy-TM) has perfectly orchestrated his way to the title. Only 15th after the qualifying practice, the Dane climbed to 2nd position at the end of the qualifying heats. Also second in the prefinal, he gave notice of his ambitions for the final in taking the best driver from Finland Teemu Suninen (Maranello-Maranello) at the end of a superb dice. “I didn’t really push hard in the prefinal”, explained Nikolaj at the foot of the podium. “I wanted to preserve my tyres, which suffered a lot in the heat. I knew that only the Final was of real importance and, after having passed Teemu, I could increase my advantage. This is for certain the best victory of my career.”

Running second for a long time, Suninen had to concede second place to Sébastien Bailly (Kosmic-Vortex) three laps from the chequered flag. After having the fastest time in qualifying practice, the Belgian was not disappointed to finish 2nd. “I really gave all I could to grab this second place”, explained Sébastien. “But I must say that Nikolaj was simply the fastest during this Final. That said, second place is a superb result !” 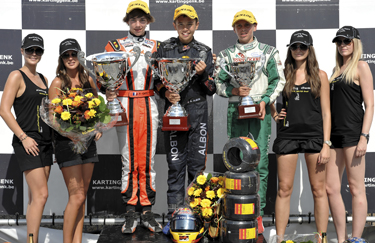 scrap. In a turbulent and tight group, the first lap had proved fatal to the hopes of several favourites, including Danish lady Michelle Gatting (CRG-Maxter) and the Austrian Thomas Jäger (Birel-BMB), who were placed 3rd and 4th after the qualifying heats. But one driver’s bad luck is another drivers good fortune. So, the Japanese Yu Kanamaru (Tony Kart-Vortex), the Brits Luke Varley (Tony Kart-Vortex), Alexander Walker (Tony Kart-TM) and Jake Lloyd (Tony Kart-TM) and the Finn Juha Mäki-Jouppi (Alpha-Parilla) completed the top 10.

As in KF2, one driver had completely dominated the KF3 Final. A young guy already supported by a famous energy drink, Alexander Albon (Intrepid-TM) has confirmed that the confidence shown in him has not been misplaced. Staring on pole position during the prefinal, the British driver made easy work as he increased his lead throughout and won to secure pole position for the Final. Then, during this decisive race, he was able to profit from the misfortune of several of his opponents on the first turn. “When I looked back after two laps, I could see the gap was already quite wide”, said Alexander. “Then I was able to concentrate on conserving the tyres and to maintain a good rhythm and it worked perfectly. This is a fantastic win. When they took me on in their young driver programme, Red Bull wanted to lead me towards a Formula 1 career. That suits perfectly because that’s my goal as well and such victories are a good step.”

Behind the dominant leader, the scraps were understandably more closely fought. Climbing well after having had several issues at the start, the Frenchman Pierre Gasly (Sodi-Parilla) was satisfied with second place on the podium. “After my 3rd place in the World Cup last year, finishing 2nd here is another superb result”, explained Pierre. “The first laps had been difficult but after that I climbed higher and higher and passed Harrison Scott shortly before the finish. Once again I have just missed a victory... Perhaps it will come in two months time in the World Cup in Portugal.”

Passed by Gasly, Harrison Scott (Tony Kart-TM) realised a small miracle in making the podium with a very limited budget and driving for a small private team, Richard Lock Racing. To make the podium, the Brit had to resist a very strong final challenge from his compatriot Jake Dennis (Top Kart-Parilla), who climbed from 14th to 4th in the Final. Starting as a strong favourite, Dutchman Max Verstappen (CRG-Maxter) could only finally make a place in the top 5, just in front of his compatriot Peter Hoevenaars (Intrepid-TM), the Ukrainian Daniil Pronenko (Birel-TM), who achieved an incredible result in climbing from 33rd to 7th place, the Italian Damiano Fioravanti (Tony Kart-Vortex), 2nd in the prefinal, the Finn Niklas Tiihonen (Birel-Parilla), starting in 22nd place, and the Spaniard Pedro Hiltbrand (Kosmic-Vortex), who climbed from 19th to 10th place in the Final. All of these young drivers will have profited immensely from this European Championship to raise their profile before, perhaps, going on to a career in motorsport. For them, the sky is the limit.