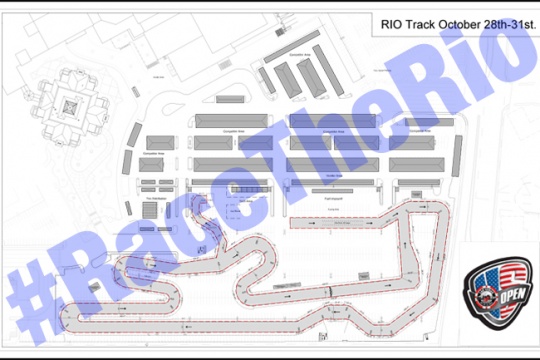 Author: Vroomkart International
With a successful series of races so far, MaxSpeed Group prepares to wrap up the season with a huge event at the Rio Hotel and Casino in Las Vegas on 28-31st October.
Report S.Murtas / Photos C.Schindel, T.McCall

The 2015 season, which now enters its decisive, most exciting phase, has a super cool event to look out to. The highly successful US Open, the new championship by MaxSpeed that has attracted the best of America as well as some of the most competitive drivers from Europe, will live its finest hour on 28-31st October at Rio Hotel and Casino in Las Vegas.

More than 300 drivers from the US and Europe are expected to make it to this unique event for the glory, the excitement, and the rewards. With 2016 Rotax Grand Finals tickets on the line, as well as over $100,000 in cash and prizes, the US Open of Las Vegas will see both Rotax and gearbox drivers invading Sin City on Halloween weekend.

MaxSpeed Group President Richard Boisclair shared some more details.
“First and foremost, allow me to say how happy I am to have come to this point in the season with so much success. We went from organizing 2 events in 2014 to 10 events in 2015, by taking over the Florida Winter Tour and starting the US Open, plus of course the always successful Grand Nationals. We’ve become one of the largest racing promoters in the Karting industry worldwide, it’s taken a lot of work and dedication, but we can now look forward to a grand finale in Vegas.”

Have you already defined the class structure for this final event?
“For the event in Vegas we will have all seven Rotax classes – from Micro all the way to DD2 Masters – plus 5 different Shifter classes (Junior, Senior, Elite, Masters and Veteran). There are also plenty of arrive and drive possibilities, both in Rotax and Shifter. We are looking to have no more than 340 drivers, at the moment registration is very strong, as we’ve managed to secure some great deals for participants, starting with an extremely aggressive room rate at $59 a night, which is unseen! The Caesar’s Entertainment people that own the Rio Hotel have helped us to build this event, which I’m sure will be a great success.”

It’s not the first time the Rio Hotel hosts kart races in its facility. What are you planning for the track layout?
“We are currently working on the track layout. We will be testing it in the next couple of days with a Rotax and a gearbox kart. The Rio will set up the parking lot for us so we’ll be able to make sure there’s no bumps, no security issues, and eventually make changes. Something I can anticipate is that the entire set-up will be quite different, as we are not after the huge numbers seen here before with 500 plus drivers. We want to create a laid-back atmosphere, we will be using more of the parking lot for the track and make sure everyone gets as much track time as possible.
The location is fantastic, no traffic at all, no parking issues, plus many people already know the Rio and it’s a nice feeling.”

What can you tell us about the awards and prizes up for grabs?
“Thanks to our sponsors, we secured a fantastic prize package that increases the outlook of the race in Vegas as well as the series as a whole. We will be handing out over $100,000 in cash and prizes, exclusive Caribbean vacations for two, plus we will be the first to award tickets to the 2016 Rotax Grand Finals. So we are sure this will attract a big crowd of European drivers, as it happened in the previous two rounds. An outstanding example is Dutch driver Rinus van Kalmthout. He came to race early in the season and he’s continued throughout, confirming he will come back also in 2016. We always try to set up a great atmosphere, with a barbecue and cocktail party at the end, as I think everyone loves it.”

Have you already managed to secure any big name for the race in Vegas?
“Yes, we will certainly have the pleasure to see multiple world champion Davide Foré, Jordon Lennox-Lamb as well as our very own Sabré Cook and Joey Wimsett. We are also talking to our friends at Sodi and they will likely send their team, so as you can see it’s all coming out nicely.”

Garett Potter, Director of Event Promotion at MAXSpeed Entertainment, is thrilled.
“We are excited to open registration for the US Open finale, and turn all our focus to make this a truly incredible event. The Rio All-Suite Hotel and Casino is ready to see the karting community back on their property. Besides securing an incredible rate per night - the lowest offered during a karting event, so rooms will not last long - Enterprise Rent-A-Car, the official rental car of the US Open, is also offering special rates for the series finale, using corporate code: XZ41T46 and pin: MAX.”

“We are ready to cap off our season in Sin City with our biggest and best event yet! With parties planned and Halloween on the Saturday night of the event weekend, it is going to be incredible both on and off the track.”