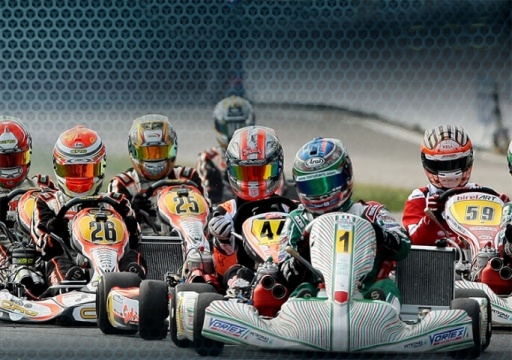 Author: Vroomkart International
We like to imagine that among the 137 participants in the World KZ and KZ2 Champs in Le Mans (F), only a dozen favourites will remain to claim the world title.


Just like in Robert Aldrich's 1967 movie about the exploits of 12 soldiers sentenced to death for serious crimes, and to whom is offered the opportunity of salvation by taking part in a dangerous mission in the German-occupied France during World War II, we like to imagine that among the 137 participants in the World KZ and KZ2 Championship which will be also held in France, in Le Mans, only a dozen likely candidates will remain to claim the world title.
It is likely, but of course it is not sure that it will happen. But if we take in consideration the 2015 season, it's a safe bet that the world champion will come out of this infamous dozen.
In a one-off race anything can happen, but in KZ there are at least ten drivers who have already been in the limelight, so the technical level is very high.
In the premier class, it's quite obvious to see of drivers like Camponeschi and Ardigo at top the list, as seen in the European Championship. But the Tony Kart/Vortex duo certainly will not have easy life. To contend for the world title there is a large group of drivers. English Ben Hanley (Croc Promotion / Tm), the toughest opponent in the European Championship who finished on the podium in the World Championship in 2 previous occasions. Then there are the veterans Foré (CRG / Maxter) and Thonon (Praga / Parilla) that together add up 5 world titles in the gearbox class. Then De Conto (CRG / Maxter), Lammers (Sodi / TM), Kozlinski (Sodi / TM), Puhakka (CRG / Maxter) and Abbasse (Sodi / TM) from whom we expect a performance that redeems their not so brilliant season. To complete the 'dirty dozen', Dutchman Jorrit Pex (CRG / TM), in top form at the moment, and therefore the most dangerous also thanks to the assistance of Jos Verstappen, who has shown in more than a few occasions to be able to make a difference in the set-up of the kart. And last but not least, French driver Iglesias, eager to follow up the good performance shown in the last race of the European Champs.
In KZ2 the competition is tight. There are certainly many factors that come into play in such a large category (101 drivers) which will see each driver having to race 5 heats to earn a place in one of the two pre-finals. And to make predictions on the list of candidates to victory in the International Super Cup based solely on the European Championship standings is not quite accurate enough. Because in addition to the European champion Joel Johansson (Energy / TM) there are several strong drivers in the line-up. Starting with the Italian bunch: Corberi (Tony Kart / Vortex), Tiene (CRG / Maxter), Celenta (Parolin / Tm), Piccioni (Righetti Ridolfi & / Modena Engines) and Zanchetta (Energy / TM). And then Fasberg (Tony Kart / Vortex), Hiltbrand (CRG / Maxter), Stan Pex (CRG / TM), Siebecke (CRG / Engines Modena), Pescador (Praga / Parilla), Habulin (TB Kart / Modena Engines) and last but not least Tom Joyner (Zanardi / Tm).

The program will start on Thursday 10 with free practice, which will continue on Friday morning. While the official qualifying will be in the afternoon. On Saturday the qualifying heats (11 laps). Then on Sunday, the pre-finals (15 laps) and Finals (22 laps). The Le Mans circuit is 1,384 meters long, raced counterclockwise, with 5 left and left and 5 right turns, and 3 straights, very important for a fast laptime ... the show is guaranteed.