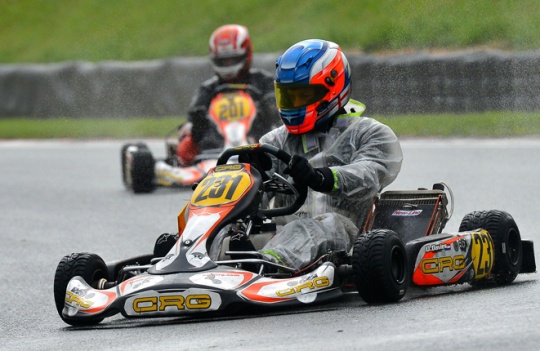 Press Release by: CRG
Great results for Team CRG Keijzer Racing in the German Championship. Forè and Pex chasing the lead in KZ2. De Conto confirmed to be the quickest in the Rotax Euro Challenge, but had to settle for the title of Vice Champion.
The double round at the beginning of September that took place in Oschersleben for the German Championship and in Genk for the final act of the Rotax Euro Challenge, saw once again a great competitiveness of the drivers at the wheel of CRG chassis, that have been among the main interpreters of both International events.

DKM, TEAM CRG KEIJZER RACING TO THE FORE
Bad weather challenged the drivers competing for the DKM in Germany at Oschersleben, and Davide Forè had to pay the toll for this in the KZ2 final, as he has been "accompanied" off track at the start of Race-1 on the wet. Despite having to concede the classification lead, the Italian driver is still in the title fight together with Jorrit Pex, who has been quite competitive again at his comeback on CRG. In Germany, CRG has been victorious with the Dutch driver Dylan Davies of team CRG Keijzer Racing, who claimed the victory in race-1, as Jorrit Pex was third. The rival Alexander Schmitz took the victory in the second final and got the lead of the classification at 155 points, but four CRG drivers are right behind and ready to challenge his lead next 4 October in Kerpen: Davide Forè is now second at 136 points, Jorrit Pex follows in third at 135, the German Maik Siebecke of SRP Racing Team is fourth at 91 points and the Dutch Davies is fifth at 90.

The Dutch driver of team CRG Keijzer Racing, Martijn Van Leeuwen, managed to keep the classification lead of KF thanks to the sixth place in Race-1 but most of all to the great second place in Race-2. Van Leeuwen will have to face his fellow country-man Richard Verschoor in the title fight, as the latter caught CRG driver at 204 thanks to the double win scored in Oschersleben.

EURO ROTAX, DE CONTO IS VICE-CHAMPION
The fourth and final round closed the Rotax Euro Challenge in Genk. The championship has been characterized with great competitiveness all the way to the end in all categories and team CRG led by Martin Reuvers with the support of HRS Racing Engines got the limelight.

CRG driver Paolo De Conto secured the title of DD2 Vice-Champion after being one of the main interpreters also in Genk, following the victories scored in the second round held in Castelletto and in the third at Wackersdorf. De Conto just missed the result in the Prefinal of Genk to aim concretely to the title, as he was hit from behind early into the race after starting from the front row alongside his main rival, the Hungarian Ferenc Kancsar, who later on claimed the title. Such a racing incident was the last thing needed, but that's how things went. De Conto's comeback in the Final, a performance built lap by lap and started from the back of the grid up to the final fifth place, allowed him to end the weekend with the fastest lap of the race and the absolute best performance.

Luka Kamali was seventh in Euro Rotax, but the German of CRG could have scored a better result had he not retired from the Final in Genk. His season has been very positive nevertheless, and it featured the jewel in the crown of the podium scored in Wackersdorf.

The title of category over 32 of DD2 Master was not missed by the Russian Igor Mukhin, who has always put in strong races and ended 15th in the absolute classification.

An incident in the Prefinal of Rotax Juniors stripped the young British driver Alex Quinn from the chance of fighting for the title. From the third place in the classification, Quinn slipped down to P15, a result that does not do justice to the speed shown in the first four rounds of the season by the young Briton of CRG.

The Spanish driver Kilian Meyer ended the last final of Genk in 11th place and the championship in P21. The Israeli Ido Cohen and the German Phil Dorr also took part in the Rotax Junior round of Genk, but did not manage to get access to the final stages. Cohen ended 28th in the final classification.

All results and classifications are available at the website rotaxmaxeurochallenge.com.