Author: Vroomkart International
Kosmic starts up in the WSK World Series with the same results’ level as in the continental series. At Algarve circuit, in Portimao, Kosmic Kart-Vortex chassis led the race both in SKF category and in KF2 and KF3, showing an enviable competitiveness.

Convers and Cooper, in Super KF category, lay down the qualification’s law, ending up the round in the lead. During the final, after the pre-final’s success, Convers has to survive only to De Vries, gaining the second position.However, Kosmic Kart Racing Department is still leading the teams’ classification, the World Cup, thus fighting with its drivers in this ranking. 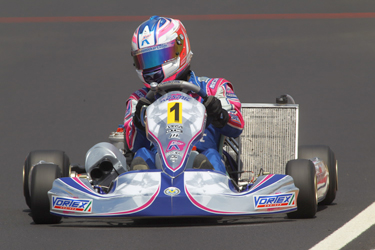 Excellent performances were also shown in KF2 category, with Sebastien Bally, Mitchell Gilbert and Javier Lopez. The last two won one round each, losing a little in the bagarre, only. Mercury’s potential was however manifest, thus allowing our drivers to do their best.
In KF3 category, Pedro Hiltbrand very well raced by the first three lines, our Spanish driver only moved back due to a few collisions, but still confirming his good synergy with the technical material, so that we can expect a lot for the next engagements.


PROTAGONISTS’ OPINION
Olivier Marechal - Kosmic Kart Racing Department’s Team Manager:
“We better planned our drivers’ line-up and we are now much more competitive. In KF2 category our technical material, chassis and engines, proved to be immediately good with such a group of professional and expert drivers. In Super KF category, Armand (Convers) is a good reference for Ben (Cooper),who is more and more improving, according to our expectations”.