Author: Vroomkart International
In Portugal clear superiority of the CRG-Maxter drivers in KZ2 in the opening event of the WSK World Series. Verstappen is once again protagonist in KF3. Good trend in Super KF too, with good performances of the CRG drivers. In KF2 Gatting is good but unlucky while Martinez is improving
Portimao (Portugal), 3rd July 2010. On the spectacular and fast International Circuit of Algarve in Portimao, the first of the three events of the new WSK World Series took place, with the participation of all the top constructors and the best drivers of international karting.
The CRG Official Team was there with its drivers in all the four categories of the championship, confirming in each phase of the race the great competiveness of its chassis and of the Maxter engines, which had to stand the test of the high temperatures of this absolutely “hot” area of southern Portugal. 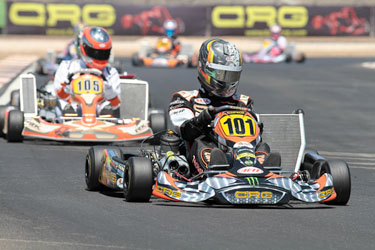 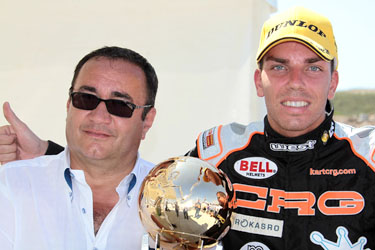 A START WITH A WIN IN KZ2. In KZ2, in the top kart category with gear-shift, the three time world champion Jonathan Thonon swept the board, together with the stronger and stronger American driver Gary Carlton, both standard bearers for CRG. The two “all blacks” drivers dominated the scene since the beginning of the timed session, achieving then a series of duels for the win which rose the enthusiasm in the attendance. Thonon, after arriving in first before Carlton in the pre-final, completed his triumph with the win in the final and an outstanding series of fastest laps at the end of a brilliant recovery after a bad start, while Carlton got onto the third step of the podium after taking the lead in the first part of the race. 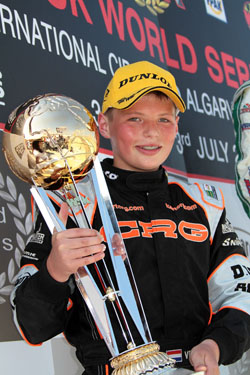 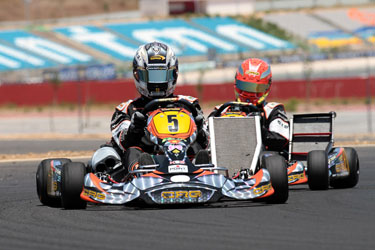 
VERSTAPPEN IS AT THE TOP IN KF3. In KF3 too, the supremacy has the brand of CRG-Maxter, especially thanks to the new Euro WSK Champion Max Verstappen; he ruled over the pre-final of Portimao and played a leading role in the final. Despite that, he did not manage to get his last goal in race-2: he was the runner-up, even though he had been in first position for great part of the race. A crash between two drivers obliged the marshals to show the yellow flags and all the karts had to slow down and form a queue. The yellow flags remained out for the last four laps: overtaking was prohibited and Verstappen found himself second at the chequered flag behind the French driver Visoiu.
On the other hand, nothing good for “Speedy” Antonio Fuoco. After gaining the seventh position during the timed session, he was obliged to give in after the qualifying heats because of a series of crashes he got involved into.

IN SUPER KF, DESPITE A POSITIVE TREND; THERE IS GREAT DISAPPOINTMENT. CRG obtained good performances in Super KF too. There are important confirmations for the technical development carried on in these last few weeks.
Davide Forè’s performances are good: he felt decidedly at ease on this track: he performed at excellent levels and managed to get a final fifth position. A mention for Felice Tiene; he was very quick in the Superpole (third) and then he achieved a great performance in the pre-final
and in the final where he arrived in eighth. Anyway, the quickest driver of the “all blacks” team was Arnaud Kozlinski: he battled hard on the ups and downs of the Circuit of Portimao and arrived just a step away from the podium – fourth both in the pre-final and the final, behind De Vries (Zanardi), Convers (Kosmic) and Catt (Tony Kart). However, there a bit of disappointment in CRG, because in the last race the world champion was excluded from the ranking because of an alleged contact with Cooper in the agitated start. That could be a fatal blow for Kozlinski’s ambitions to fill the gap in the championship. On the other hand, Eddy Tinini had several troubles with his set-up but, anyway, he managed to arrive in 14th in the final, with a always growing racing pace. 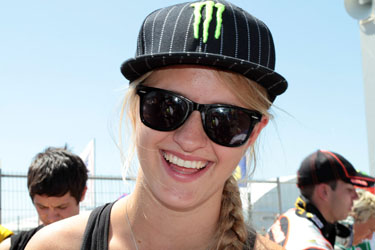 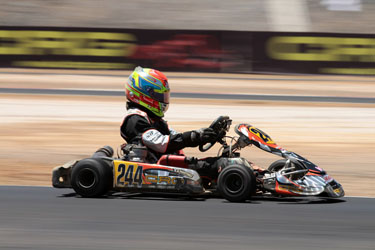 GOOD RESULTS IN KF2. In KF2, the Danish driver Michelle Gatting, after showing her undisputed talent during the practice with a fourth place and a second place in one of the heats, arrived in 6th in the pre-final and then 15th in the final, after a long battle for the first positions. Gianni Martinez too is in peak form. He achieved excellent performances till he was obliged to retire in the final because of the damages he had as a consequence of several contacts with his competitors. The British driver Lock (Tony Kart) eventually won the race.
Next event in schedule for the WSK World Series is on 1st August in the United States – Millville – NJ. The third and last event is in Egypt next 31st October in Sharm el Sheik.

THE INTERVIEWS
Omar Di Gesualdo, CRG Team Manager: “Thanks to the cooperation of the major constructors and teams, this WSK World Series presented on the starting blocks with the best credentials, meeting the expectations of those who were pushing for an event which could represent international karting at its top in all the categories. The level was definitely excellent, with more than 100 drivers on the track. In KZ2 we showed our clear superiority with Thonon, excellent his reliability in the results, and with Carlton. In KF2, Gatting was once again very quick even though she still suffers at the start; despite that she managed to clearly show what her characteristics are. Martinez too did well, especially during the heats and in the finals. Also in KF3 we are in the very first positions thanks to Verstappen. We could have achieved better results with ‘Speedy’ too if our Italian driver had been able to control his emotions during the heats. We are happy for the technical improvement we had in Super KF; we tested the new equipment in the last races and here we had the confirmation that we are on the right path.”

Jonathan Thonon (KZ2): “It was a wonderful race. I believed I could make it till the end. Before the two finals we changed something in the carburetion of the engine and in the chassis; I performed definitely better if compared to my performance during the heats. In the final I had a good start, but I waited for the right moment to attack the first positions, without trying dangerous overtakings. I controlled the race in order to give CRG a good result, and I’m very happy for this. I want to thank the whole team, from the first to the last team member. It was a good weekend. Karting is my life, and I’m happy for the way this first race of the WSK World Series went.”

Gary Carlton (KZ2): “I’m quite happy for this race. I got a good progress. I achieved the best time of the practice and I won one of the heats. In the pre-final I could have won but in the last laps I had a failure of the petrol-feed system and so I was happy with the second position behind Thonon. In the finale I duelled for the win, but eventually I made a mistake in the chicane and I was overtaken both by Thonon and Dreezen. It’s a pity: I could have taken part in the second event in the United States as the leader of the ranking. I hope to do better on the circuit of my Country, even though I have never practiced on the track of Millville. It will definitely be a great occasion to show my real value in front of my fans.”
Max Verstappen (KF3): “I was fast throughout the whole weekend, I won all the three qualifying heats and the pre-final. In the final, after being the leader for almost the whole race, Visoiu overtook me but I was sure I could overtake him again. I was trying to find the right moment to take back the lead of the race, when after a crash between two drivers the yellow flags were shown along the circuit. At that point I didn’t stand a chance and I had to be happy with a second place.”

Davide Forè (Super KF): “Personally I think I’ve just made the best race of my season. In Super KF our performance was rather encouraging, even though we missed the final result. However, we come back from Portugal with the awareness of an outstanding improvement. Compared to the last event of the WSK Euro Series, we took a good step forward from the point of view of the performance and we are getting nearer and nearer to our competitors. Now we just need to get on with the technical development in order to try to win in the two next events of the WSK World Series.” 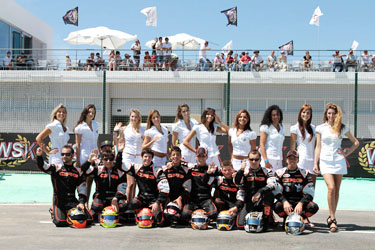 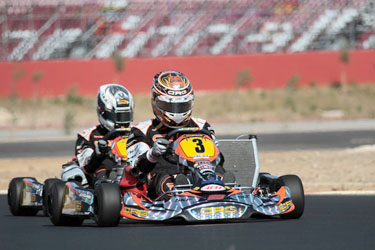 The CRG-Maxter Official Team drivers at the first event of the WSK World Series in Portugal. Right, Arnaud Kozlinski in the Super KF final on the International Circuit of Algarve in Portimao (Portugal).