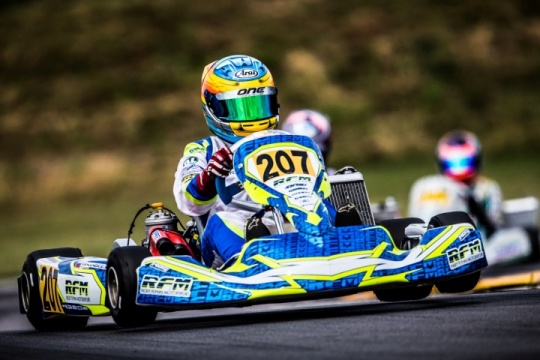 Press Release by: Sebastian Fernandez
In his debut with Ricky Flynn Motorsport, Sebastian Fernandez is fantastic, he feels immediately at home with his material and fitting in perfectly with the prestigious British team.
The debut was on the last round of the KFJ European Championship held in Kristianstad (Sweden) one the 26th July weekend.

With few kilometres backing him and his new material, you could already see from the heats that Sebastian would have put in a great weekend of racing and eighteenth place in qualifiers (out of 75 entrees) this is just the start.

On Saturday, during the decisive eliminating heats and despite the conditions of the track that kept changing due to the rainfall late morning. Sebastian scores a number of positive results with a fourth place, two third places and a second place.

Both on a wet track and a dry one Sebastian shows the same determination and the same speed, he is on pole start for the second prefinal on schedule for Sunday.

Unfortunately, a prefinal held on a damp track changes the values on the field and Sebastian has to settle for sixth final place.

He’s on row six start for the final, things get complicated and despite his speed and pace being similar to the leaders, the fight makes him duel for places far from podium and he has to settle for twelfth final place, he certainly deserved more but he is aware that he will be able to put in a brilliant round during the world championship, held in a single round, that will be held at the international circuit in La Conca on 27th September 2015.