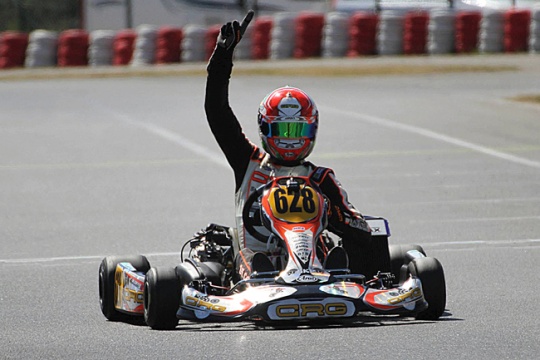 Press Release by: CRG
CRG scored a one-two in Germany at the Euro Rotax Challenge in DD2, a victory in DD2 Master and a podium in Junior. Hiccup for Felice Tiene in Sweden.
Bitter-sweet weekend for CRG at the end of the double exit in Germany, at Wackersdorf, for the third round of Rotax Euro Challenge and in Sweden, at Kristianstad, for the third and last round of the European CIK-FIA Championship.

A very positive note came from Germany with the stunning one-two in DD2 by Paolo De Conto and the German Luka Kamali, and then again due to the victory in DD2 Master for Igor Mukhin and Alex Quinn's podium in Junior. The bitter note came from Sweden instead, where Felice Tiene was stripped of the satisfaction of the sixth place in the Final. The Italian driver ended the European KF Championship in fourth position.

ROTAX EURO CHALLENGE: PODIUM FOR FOUR CRG DRIVERS
DD2. The Rotax Euro Challenge took place in Germany and Paolo De Conto has been again the main protagonist of DD2, on CRG Dark Rider chassis, as he came to the fore this time together with his team mate Luka Kamali, who was very quick in his home race. The two CRG drivers have been shining since qualifying, when De Conto set the second best time in the first group (49.639s) and Kamali was quickest in the second one (50.128s). The winning pace of the two CRG drivers continued in qualifying heats as they secured two wins each. In Prefinal, Paolo De Conto and Luka Kamali had to settle for the second and third position behind Lammers, but the pairing did not miss out on the prestigious result in the Final, as De Conto claimed the victory after taking the lead at lap two and pulled away, while Kamali followed him in second. The Russian driver Igor Mukhin completed the CRG success taking the victory in DD2 Master, confirming his leadership in the standings too. The other German Niklas Granz, fifth in the heats, had to retire in the Prefinal but in the Final managed to make up for the lost ground and recouped well up to P13.

In Rotax Euro Challenge, De Conto is currently 3 points short of the leader thanks to this second victory in a row (Castelletto and Wackersdorf), and put his name forward for the final victory of DD2
that will take into account two mandatory jokers. Luka Kamali is sixth of the standings instead.

SENIORS. In Seniors, the British driver Harry Webb ended a good weekend with P7 in the Final, while the Spaniard Mauricio van der Laan ended 17th after a great comeback race. The British Ed Brand had to stop early in the Final due to an incident instead. Webb is sixth in the standings, while Van der Laan and Brand are equal on points in P7.

JUNIORS. In Juniors, the young driver Alex Quinn, managed to counter-charge from the second chance race shining in the final stages. He was eighth in the Prefinal at the end of an excellent comeback race and then took the podium of a Final that he could have also won. He claimed a great P3 that highlighted again the quality of CRG KT2 chassis and his unquestionable speed, awarding CRG with the fourth podium of the weekend. The Spaniard Kilian Meyer ended 15th after running the second chance race, while the German Tim Mika Metz was 28th. The Israeli Ido Cohen had to retire early on after ending the Prefinal in 20th place. Bad luck hit instead the German Phil Doerr and the Swede David Rehme that just missed out on overcoming the second chance race hurdle. Alex Quinn is currently sixth in the standings, 6 points short of the leader.

All results and classifications are available at www.rotaxmaxeurochallenge.com.

A BITTER EUROPEAN KF CHAMPIONSHIP FOR TIENE
“An absurd decision” this has been Felice Tiene's comment at the end of the Final of the European CIK-FIA Championship in Kristianstad, when the Italian driver of CRG was disqualified after crossing the line in P6, for an hypothetical bad manoeuvre on Basz at the last lap. Considering the sporting fairness of the Italian driver of CRG, it is difficult to disagree with Tiene. That was a real pity as both Tiene and CRG deserved a different epilogue of the European KF Championship.

Felice Tiene has been one of the main protagonists of the final round of the European KF Championship in Kristianstad, especially in qualifying heats when he was fourth thanks to three second places and a third. A good performance in the heats was also put in by his team mate from Belgium Benjamin Lessennes, who was absolute ninth. The Prefinal did not bring the results that they had hoped for though. Tiene had to settle for P12, while, Lessennes to the last position due to a penalty at the start. In the Final, Tiene recouped well up to P6 (but was later on disqualified), Lessennes ended 12th instead. Among the best of CRG drivers, the German Hannes Janker of team TB Motorsport, ended the Final in P4, the Dutch Martijn Van Leeuwen of team CRG Keijzer Racing, was ninth instead. The British Archie Tillett, forced to the second chance race, could not get access to the final stages. Felice Tiene ended the European KF Championship in fourth position.

All results and classifications are available at www.cikfia.com and www.cikfiachampionship.com.