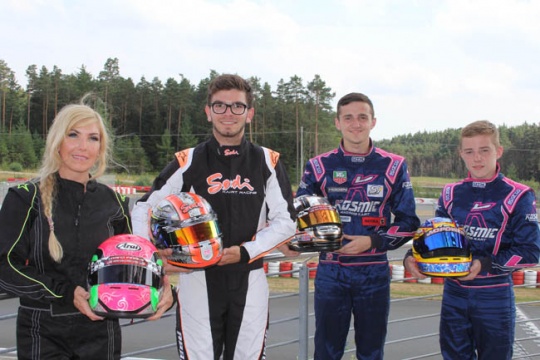 Press Release by: RGMMC
The ROTAX MAX Euro Challenge looks back on a hot and mostly sunny qualifying day at Wackersdorf (DEU).
The first decisive sessions of the third round of the season proved to be highly balanced and ascertained the grids for the upcoming heats on Saturday.
Dean MacDonald (Aim Motorsport) from the UK was the quickest youngster of the junior category. By a time of 51.621 seconds the double winner from Castelletto was the fastest man pushing his fellow countrymen Johnathan Hoggard (KR Sport) and Fin Kenneally (Aim Motorsport) closely to the chasers positions. Behind the UK trio Austria's Nicolas Schoell (Strawberry Racing) broke the total dominance of the British armada by taking fourth place in front of Kiern Jewiss (Strawberry Racing) in fifth spot. A quite tough qualifying experienced championship leader Axel Charpentier (Strawberry Racing). The UK driver had to be satisfied with twelfth place in the 47 drivers comprising grid.

The senior category again proved high level of competition in the qualifying. In the end not less than 50 of 55 drivers were separated by less than one second. Yet the session was a clear matter for Brett Ward (Aim Motorsport) from Great Britain. He set the pace by a best time of 51.135 seconds and was remarkably faster than Dutchman Rinus van Kalmthout (Daems Racing) who lost more than one tenth of a second on the 1.222 metres long circuit. Third place went to Jonathan Aberdein (KR Sport) from South Africa ahead of his teammate Denis Mavlanov (KR Sport) from Russia. Sam Marsh (Dan Holland Racing) – third placed driver of the championship – completed the top five positions, while Italy's Alessandro Trombelli (MKS srl) established himself in sixth place in front of title favourite and overall leader Pierce Lehane (Strawberry Racing).

The DD2 category came up with a big surprise after the qualifying. As most of the top drivers were set in the first group by lottery, the second group was expected to be slower. In fact it was so much slower that the 101 per cent rule had to be applied, which mixed up the grid in the end. Frenchman Anthony Abbasse (Sodikart) set the benchmark in the DD2 class by a time of 49.593 seconds thus conquering the pole position for the heats on Saturday. Next to him it was Luka Kamali (CRG S.P.A.) driving the quickest time in group 2 by 50.128 seconds. Italy's Paolo DeConto (CRG S.P.A.) tied in with his latest success from Castelletto and confirmed his performance by the third place ahead of Switzerland's Philipp Seewer (Spirit Racing). Giving his debut at the ROTAX MAX Euro Challenge Bas Lammers – recently having switched to Sodikart – was in brilliant shape. The Dutchman who belongs to the most experienced and successful drivers of the international karting scene complemented the top five positions, which were missing championship leader Ferenc Kancsar (BirelART/KMS). The man from Hungary had to deal with unexplainable problems and only ended up in 31st place – even behind the best DD2 Masters driver. This was Igor Mukhin (CRG S.P.A) from Russia in 18th position, although the actual quickest Master was Tamsin Germain (DG Racing). But the UK lady had the disadvantage of being in the quicker group, which made her drop back to 23rd place in the overall grid.

On Saturday race action will kick off. All told 18 qualifying heats are on the agenda determining the grids for the final races on Sunday. Everybody is invited to join the race action, as live TV coverage will start on Friday and continue throughout the weekend. So stay tuned on the official website www.rotaxmaxeurochallenge.com or www.rgmmcmedia.com, where you get all information regarding reports, photos, results and live TV stream.