Lammers doubles 2009 success in KZ1. De Conto grabs the title in KZ2.
The final races of the KZ1-KZ2 European Championship, round two, held in Varennes, France have fulfilled expectations, even if with changes in the leading places, especially the KZ2, the most hard-fought out. A very fast Pizzuti is struck once again by bad luck, just like in Sarno.

Once again, one of the most important CIK-FIA championships sees the number of entries dwindling.
Nineteen drivers on KZ1 grid start (26 in Sarno), while we see 53 lined up for KZ2 (75 in Sarno). If this was expected for KZ1, seeing how the Iglesias-Lammers duo dominates over the first round held in Sarno and the absence again of official teams, we expected to see few grids in KF2. Over 30 drivers have left the event (compared to the list of entries), which has always been the most important European appointment.

QUALIFYING HEATS
At the end of KZ1 heats does not add any innovative issue compare to the first round, Iglesias takes three wins after having stopped fourth best time in qua 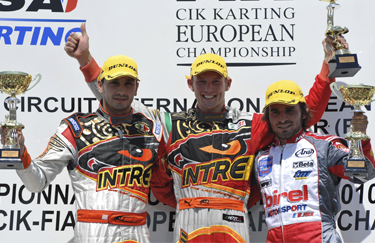 lifiers. . Frenchman Abbasse makes the most of the situation on his home track and completes first row after having allowed pole to be taken. The other title contender, Bas Lammers, is on second row grid start next to Mich.

In KZ2things change compared to Sarno. Italy’s Paolo de Conto, provisional championship leader, doesn’t seem to have a great feeling for this track and ends up on row four grid for final 1start. Another Italian is on front row grid, Yuri Lucati, who takes three heat wins out of five after having stopped second best time in qualifying heats. Next to him, Yan Pesce, in force with Energy, with two wins and two second places in heats. Beitske Visser, very fast, is on second row grid and Poland’s Daniel Fuchs is on row two start. Crg standard-bearer, Luca Tilloca is fifth after having grabbed two second and a third place.

FINALS
Dutchman Bas Lammers, already European Champion in 2009, repeats himself even beating his own teammate, Jeremy Iglesias in what actually was the real race. The two raced for the title to the last laps of race2, when the French driver felt all the pressure of having to win at all costs (Lammers can count on two wins while Iglesias just on one), he tried to overtake from inside and touched his team mate without penalising him. The race is over for him with second championship place. Brilliant performance on behalf of France’s Birel driver Thomas Mich, two third places and podium place on overall scoreboard.
Another to Frenchmen, Anthony Abbasse and Manuel Renaudie fight it out in both finals (5thand 4th for Anthony and 4th and 6th or Manuel). They end up with equal points and equal fourth in championship. Then there’s England’s Jack Hawksworth to follow; he gains places in both finals and De Brabander from Belgium, very fast in race 2 where he grabs second, also Italy’s Alessandro Piccini is very fast.

KZ2 is very exciting. The p 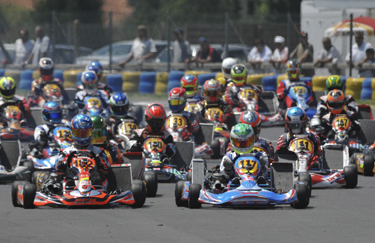 rotagonists of the first round, De Conto in the lead, work had to find the right feeling with the track. The newcomers, championship revelations, Beitske Visser and Yan Pesce make the most f it. Thee two make all the difference on the field in race 1, shadowed by Lucati and Pizzuti, after a forcing by the Frenchman, half way through the race, Visser grits is teeth, presses hard and goes on to grab first 3 tenths ahead of his rivals. Fuchs and Midrla from Polish Jodka Team marked Birel stand out in fifth and sixth place. Tilloc, De Conto, Leijtens and Benna, protagonists in Sarno are a let down 8th, 9th, 11th and 12th. Race 2 starts in a muddle De Conto has to win or he risks losing the title, but it’s Visser who pays the consequences on lap four, when he drops lead after being overtaken by Pesce. In the fight Brenna “presses” hard on his Visser that hits Pizzuti and both end up off the track. The race takes on a different aspect with Pesce now without the fast Dutch driver around can lead on Brenna to grab the chequered flag. Brenna is disqualified for having made Visser take an early exit. De Conto also gained for the confusion early on in he race as he climbs to third and stays there to the finishing line making it an all Energy European podium. The Italian is first with 6 points, followed by Pesce (58) and Leijtens (43) ending 5th.
Visser is 25th and has to settle for fourth championship place just 10 points from podium. 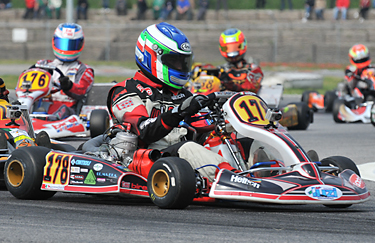