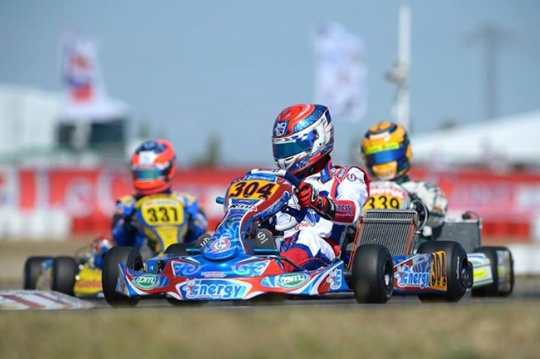 Press Release by: FIA Karting
Although the consecration of Flavio Camponeschi as the CIK-FIA European KZ Championship was no longer in doubt after Zuera, the European KZ2 Champion was decided during the Final at Genk after a lot of suspense…
... Joel Johansson was eventually crowned after a duel at a distance with Pedro Hiltbrand. Again victorious in the Final of the CIK-FIA Karting Academy Trophy, Marta Garcia Lopez increased her lead in the provisional standings.

The perfect organisation and the remarkable venue of Genk resulted in a very successful Competition this weekend in Belgium. Paul Lemmens’s professional team as always had the expertise at their fingertips, while the track at Genk demanded a lot from drivers and machines. The public flocked to the track for the Finals, and the presence of Max Verstappen to award the cups on the podium was highly appreciated. Many penalties sanctioned ill-judged manoeuvres thanks to the detachable front fairings, avoiding incidents that had previously been very common on the first lap. Competition was extremely tight in KZ and KZ2, while many battles enlivened the racing in the CIK-FIA Karting Academy Trophy. Apart from a little rain during the Prefinals, the weather did not disrupt the Races.

Despite an unfortunately limited entry, the fight for victory in KZ did not drop in intensity. Flavio Camponeschi (Tony Kart-Vortex-B'stone) began with the fastest time in Qualifying Practice, Simo Puhakka (CRG-Maxter-B'stone) went ahead in the Qualifying Heats and Jorrit Pex (Intrepid-TM Racing- B'stone) won the Prefinal ahead of Marco Ardigo (Tony Kart-Vortex-B'stone). Increasingly effective, Jérémy Iglesias (Sodi-TM Racing B'stone) seized the lead from the second lap of the Final and then defended from the return of Rick Dreezen (Ricciardo-Parilla-B'stone) to clinch a superb victory. Camponeschi again faced his teammate Ardigo to take 3rd place. After the finish, the result changed because of penalties for Dreezen and Camponeschi for detached front fairings. Ardigo took 2nd position ahead of Ben Hanley (Croc Racing Promotions-TM-B'stone).

Already the World Champion in the KF1 category in 2012, the Italian Flavio Camponeschi won the CIK-FIA European KZ Championship this time. "It is a great satisfaction to win this prestigious title,” said Flavio Camponeschi. "The KZ category gathers the best drivers in the world, one cannot help dreaming of the highest level in Karting. My main opponent was my team-mate Marco Ardigo, an indisputable benchmark. We were able to fight on an equal footing without restrictions and that's what gave full value to the Championship. Our team has done an outstanding job for us, slightly ahead of the others while the Competition was very tight from start to finish." The Tony Kart Racing Team had doubled in the Championship with Marco Ardigo in 2nd position, with Ben Hanley finishing 3rd after some hazards in Belgium. Iglesias took 4th place ahead of Patrik Hajek (Formula K-Parilla-B'stone).

Suspense until the end for Johansson in KZ2

Arriving at Genk as leader of the CIK-FIA European KZ2 Championship, Pedro Hiltbrand (CRGSPA-Maxter-LeCont) found several obstacles in way in Belgium. Stan Pex (Intrepid-TM Racing-LeCont) was the fastest in Qualifying Practice ahead of Lorenzo Camplese (Parolin-TM Racing-LeCont) and Alexander Schmitz (Tony Kart-Vortex-LeCont) with Hiltbrand only 28th. Joel Johansson (Energy-TM Racing-LeCont) went ahead at the end of the Qualifying Heats against Felice Tiene (CRGSPA-Maxter-LeCont). Further delayed by an incident and a penalty, Hiltbrand was 23rd. In a slippery and tricky Prefinal after a little rain, Pex controlled Schmitz’s recovery, Johansson ensured 3rd place. Pex and Schmitz battled again in Final, this time in the dry, far ahead of their opponents. Schmitz got the better of Pex. Starting cautiously Johansson rose to 3rd place with great composure and closed on the two leaders late in the race, aware that he had fulfilled his mission for the Championship. Hiltbrand had the ability to creep up to 9th position but was powerless to stop the coronation of Johansson.

“Finally!" exclaimed Joel Johansson at the finish. "I have twice finished 2nd in the European Championship in 2011 and 2013 at Wackersdorf and here at Genk. This time it was my turn to win! It was not easy to handle the Finals because I had to push hard avoiding any incident. I knew my equipment would be increasingly fast in the Final, but I did not take any risks in the early laps and then I was able to free myself from a lively group to reach the 3rd place that allowed me to be Champion." In the final standings of the Championship, Hiltbrand had to settle for 2nd place, Andreas Fasberg (Tony Kart-Vortex-LeCont) rose to 3rd position ahead of Luca Corberi (Tony Kart-Vortex-LeCont) and Paolo Besancenez (Tony Kart-Vortex-LeCont).

By taking a second victory in the CIK-FIA Karting Academy Trophy in Genk, Spain's Marta Garcia Lopez is now assured of the title at the last Competition at Le Mans in September. The driver of the FIA "Women in Motorsport" Commission has mastered her subject to perfection in the top three. Before her win in the Final, she faced two compatriots, Xavier Lloveras Brunet and Alejandro Lahoz Lopez. The Dutchman Dylan Buys took control by winning the Prefinal, but Spanish supremacy was restored in the Final with the unquestionable victory of Garcia Lopez ahead of Lloveras Brunet and Lahoz Lopez. The Brazilian Murilo Della Coletta and French Theo Nouet completed the top five. These three Spaniards are in the same order in the provisional standings of the Trophy, with Briton Alfie Brown and Della Coletta 4th and 5th.