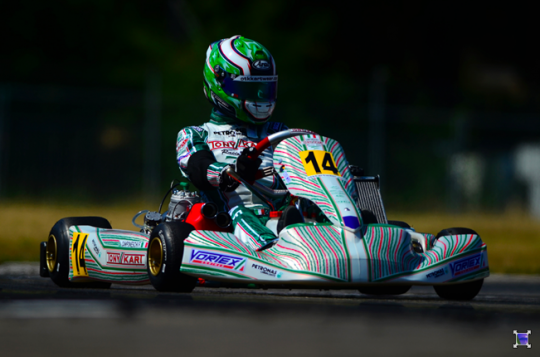 Press Release by: OTK Kart Group
Tony Kart Racing Team won the CIK-FIA European Championship with Camponeschi in the top class, the KZ. This great success has been completed by the 2nd position of Ardigò.
The expectations of the day before the race have been fully met. The CIK European Championship in KZ was completely within our reach; Flavio Camponeschi and Marco Ardigò were leading the rating in this order after two victories of Camponeschi and many podiums gained by Ardigò during the previous races. The Belgian race on the circuit in Genk seemed to be a formality under the results and the quality of our technical material.
So in Genk, our standard-bearers competed for the Championship of the queen class in an exciting challenge ending up with a fantastic continental double victory. Camponeschi closed the Final classing third and Ardigò fourth (he also did the best lap in final), but excitements did not end at the finishing line, as Camponeschi got a penalization of 30 seconds because he reached the winning post with the front fairing slightly in the wrong place. So, according to the committee’s decisions, the rating has been modified after the finishing line and Ardigò stepped onto the second place of the podium because also the driver classing second, Dreezen, got the same penalization of Camponeschi.
This anyway did not affect the final result, and after that, the KZ CIK-FIA European Championship rating was made official with Camponeschi Champion and Ardigò on the second step of the podium.
During the whole weekend, both Camponeschi and Ardigò proved to have the right potential to be winning on this occasion too. Camponeschi actually opened hostilities centering the pole position with a fantastic 51”828.
In the heats our drivers have always been in the top positions and Ardigò won one of the qualifying races, while Camponeschi centered a best lap.
In the prefinal, on the wet track after a heavy shower, Ardigò fought for the success with Pex and Camponeschi ended in the fifth position.
In the Final our drivers were completely concentrated on the race and on the Championship, so they could avoid running any useless risks in the hard challenge for the success.
The light shiver we mentioned above, did not affect the splendid “Green” triumph, for a double victory in the European Championship of the most prestigious class, the KZ. This success is following the “one-two” sequence, in reversed order (Ardigò-Camponeschi) which started during the 2014 World Championship.
KZ2. The great day for our Racing Team and for Tony Kart and Vortex colors has been further enriched by the success of the German driver Alexander Schmitz from KSM Racing Team, who brilliantly stood out during KZ2 final, run completely in the rain.
Smith won a race where the first eight positions are occupied by four Tony Kar-Vortex: Luca Corberi (fourth), Andreas Fasberg (sixth) and Alessio Piccini (eighth).
In the final rating our driver Fasberg, winner of the opening race in Sarno, stepped onto the podium with the absolute third position, preceding Luca Corberi.
Also in the KZ2 European Championship Tony Kart-Vortex gained two victories out of three races, thanks to Fasberg and Smith.