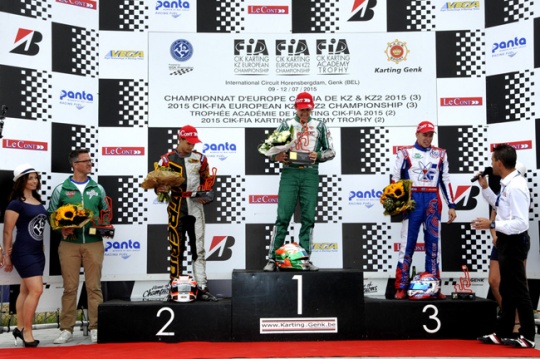 Press Release by: WSK
The final round of CIK-FIA European KZ & KZ2 Champs in Genk (B) goes to Iglesias (F – Sodi-TM KZ), Schmitz (D – Tony-Vortex KZ2) and Garcia (E – Parolin-Fim Academy).
Gripping final rush in Genk
Even a sudden shower contributed to make this final round of the European CIK-FIA KZ and KZ2 championship thrilling. Today, on the Horensbergdam Circuit in Genk (B), the titles of the two international categories were awarded after rather slippery Prefinals, fast and heated Finals. It was a great show which was available live in streaming on cikfia.tv andcikfiachampionship.com. The appointment with international kart racing will continue next week, with the special TV report on Motors TV, with a recap of this last weekend and of the whole Championship which led Flavio Camponeschi and Joel Johansson to the KZ and KZ2 titles. Great show also in the second round of the CIK-FIA Karting Academy Trophy, won by the Spanish Marta Garcia.

The Final in KZ won by Iglesias, Camponeschi is the champion
In the heated KZ Final, the Dutch Jorrit Pex (Intrepid-TM-Bridgestone) left the leadership to the French Jeremy Iglesias (Sodi-TM-Bridgestone), who kept the head of the race until the end. The Belgian Rick Dreezen (Ricciardo-Parilla-Bridgestone), then, managed to grab the 2nd place, followed by Flavio Camponeschi (Tony Kart-Vortex-Bridgestone). For a reported issue with their front fairing, Dreezen and Camponeschi got hit by a 30” penalty. Their position were taken by Marco Ardigò (Tony Kart-Vortex-Bridgestone) and Ben Hanley (Croc-TM). However, the Italian remained leader of the standings and won the title. Iglesias was awarded by the F.1 driver Max Verstappen, who won the 2013 KZ title right here in Genk.

Schmitz wins the KZ2 Final, Johansson conquers the title
It was a matter between the German Alexander Schmitz (Tony Kart-Vortex-LeCont) and the Dutch Stan Pex (Intrepid-TM-LeCont) the KZ2 Final. The two drivers were the protagonists of a long duel which, eventually, was won by Schmitz. The winner stepped onto the podium accompanied by his team-manager, Ralf Schumacher. Pex had to keep at bay Joel Johansson (Energy-TM-LeCont) on the last laps to secure his second position. The Swedish driver finished third after dropping back to fifth. This result allowed him to win the European KZ2 title.

Marta Garcia strikes again in the Academy
Spain continues to rule in the Karting Academy Trophy. Here, Marta Garcia won again, after her victory in the season-opener in Zuera (E). The Spanish girl is steadily in first position in the general standings. Behind her, Xavier Lloveras, while Alejandro Lahoz finished third after the penalty which hit the Belgian Michelangelo Amendola (all on Parolin-FIM-Bridgestone).