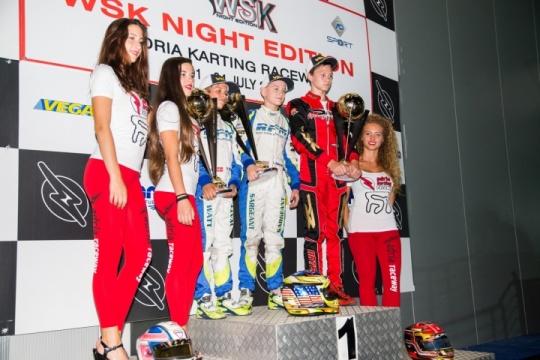 Press Release by: DR Racing Kart
Great result for Danilo Rossi’s team at the WSK Night Edition, held on the circuit of Adria on 4-5 July. Two podium finishes - one in KFJ with Artem Petrov and the other in the single-make X30 Senior class with Kevin Jayne - that demonstrate the competitiveness and versatility of DR equipment.
DR Racing team fielded as many as 8 drivers in KFJ, with Petrov stopping the 6th fastest time in qualifying (best of DR team) and 5th place after the heats with two 4th and a 2nd place. The heat go well also for Filippo Lazzaroni, 6th overall after two 3rd and 5th place, while Sergey Travnikov (22nd), Nikita Aleksandrov (25th), Justas Jonusis (26th after a good 7th in qualifying), Artem Slutskiy (29th), Giacomo Altoé (32nd) and Zahar Slutskiy (33rd) find it more difficult to adapt to racing at "night".
Russian Petrov seems to be at ease at Adria International Raceway, and the 3rd place in the prefinal A starting grid soon turns into 2nd position after the start. The Russian holds on to his position for most of the race, then briefly loses it regaining it all the way to the chequered flag.
With the final front row missed by 6 hundredths (and the fastest lap by only 3 thousandths) Petrov looks to the final knowing he can fight for the win even from 4th on the grid. After a careful first lap, the Russian moves to P2 right behind the leader on lap 2, and on lap 4 he takes the lead. The pace increases, Artem tries to stretch his lead unsuccessfully and after four laps is taken by Sargeant. After a few laps under yellow flags, the final gets going again with only four laps remaining. The Russian tries every trick in the book to move past, the American defends well, and in the last lap Petrov gets taken losing second place to Watt, having to settle for the lowest step of the podium. Good performance also by Lazzaroni who fights for 4th place throughout the race, and after dropping down to 8th with two laps to go he manages to recover up to 6th.

In X30 Senior, French Kevin Jayne is the fastest in qualifying (50 "466) and takes the victory in the pre-final after an intense fight all the way through. A penalty of 3" but prevents him from taking the pole position in the final, where he is forced to recover from the 4th having lost two positions at the start. The fastest lap of the race (like in the pre-final) allows him to move behind the leader, with no further progression. Jayne has to settle for 2nd… too bad, because the victory was at hand.

In the gearbox category, the KZ2, Moreno di Silvestre stops the second fastest lap in qualifying, but the retirement in the second heat also affects the next one and the starting grid position for the pre-final. The pace of the Italian driver is worthy of a top-3 result, and that’s what the driver DR gets after recovering up to 3rd place. But the final does not go his way, and after a few laps di Silvestre is relegated to 4th, where he finishes at 4” from the podium.