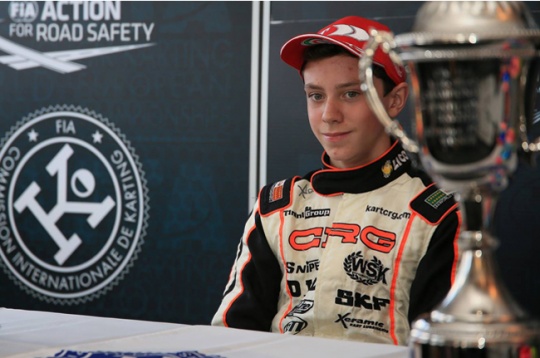 Press Release by: CRG
In KF Junior, Alex Quinn had the satisfaction of claiming the second place, which awarded the British driver of CRG with his first podium.
The second round of the European KF and KF Junior Championships held in England at the PFI Circuit saw the first podium of the very young British driver of CRG Alex Quinn, who has been a great protagonist of the final stages of the KF Junior weekend on the CRG KT2 chassis securing the second place.

HILTBRAND SIXTH IN KF AFTER A GOOD WEEKEND
A great performance was put in by the Spaniard Pedro Hiltbrand in KF at the wheel of the CRG Gem Star chassis, as he has always been among the quickest at PFI. He claimed the second place of his series in qualifying (fourth absolute), the third after heats and the third in the Prefinal. In the Final, he placed himself in P3 but had unfortunately to concede some meters towards the end of a tight race and had to settle for the final P6, but Hiltbrand confirmed anyway his speed throughout the weekend.
The KF Final did not give much space for a good result to Felice Tiene. He fought for the top positions after recouping well from P12 of the Prefinal and brilliant qualifying heats that saw him completing his effort in P5 which earned him 6 points for the championship. Unfortunately, while gaining some positions and when close to Hiltbrand, Tiene had a contact with the Dutch Martijn Van Leeuwen (P7) of team CRG Keijzer Racing closing his run off track.

Archie Tillett had also to retire eight laps in the Final, after he had to run the second chance race and recovering well in Prefinal up to the 19th place. The German Hannes Janker of team TB Motorsport ended in the top ten closing his effort in 10th place. Benjamin Lessennes ended 13th after a troubled start.

GREAT SECOND PLACE FOR QUINN IN KF JUNIOR
KF Junior welcomed the arrival of another protagonist in the category, the British Alex Quinn, who has been great in this round and has been growing for a while with CRG works team. He came to the fore last year displaying great speed in the World Championship held in Essay. At PFI Alex Quinn has been stunning in Prefinal and took P2. In the Final, the British driver of CRG fought for top positions in a series of very tight duels, taking also the lead and keeping it for 5 laps in the closing stages. In the final two laps he slipped down to P5 before getting back to P2 and keeping it all the way to the flag. This was his first podium in a European Championship and also the first with CRG.
Muizzuddin put in a good performance in In KF Junior. He was 12th in Final after recovering 13 places from the Prefinal. He took P7 in qualifying, and the 16th in the heats.

The third and final round of the European KF and KF Junior Championship is scheduled for next 26 July in Kristianstad (Sweden).