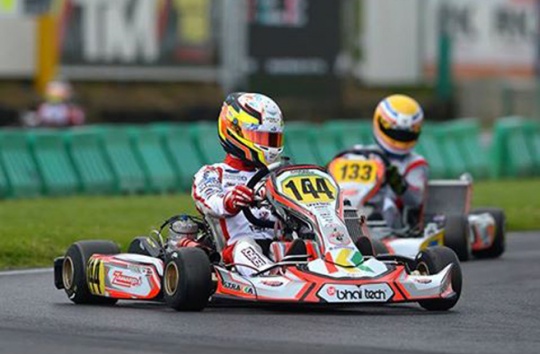 Press Release by: FIA Karting
The PF International circuit lived up to its reputation at the second Competition of the CIK-FIA European KF and KF-Junior Championship.

In the homeland of motorsport, battles at all levels facilitated each race in both categories, with 108 drivers present for a performance of rare intensity for two full days. Ranked 2nd in the KF Final, Ben Hanley kept the advantage in the Championship against the winner Tom Joyner. In KF-Junior, two new Drivers were highlighted in the top places, Presley Martono and Alex Quinn, but Kenny Roosens remains the leader in the Championship.

The PFI Competition also enabled Historic Karts to show off in the paddock and on the track on several occasions. The CIK-FIA also used this Competition for the official debut of the new OK engines, to be approved in 2016. Vortex, TM and IAME were present for the various demonstrations with their top Drivers. Media representatives were offered a few laps at the wheel of the new machines.

Diametrically opposite to the the Portuguese circuit of Portimao, the British PFI circuit offered a particularly difficult challenge for the 2nd European Competition for KF and KF-Junior. Physically and technically demanding, Paul Fletcher’s track also requires a strong mind to overcome its difficulties. In exchange, it rewards perseverance and determination allowing beautiful comebacks, punctuated by frequent overtaking. The weather did not disrupt the running of any of the exciting races and the sun even accompanied the finals. Thanks to the the new front fairing fasteners set up by CIK-FIA, the number of incidents decreased significantly, thus contributing to the sporting success of the UK Competition.

The relentless return of Joyner

The 2013 KF World Champion didn’t start in the best way with his 23rd time in Qualifying Practice. Consistent in his efforts to pick up places but delayed by a technical retirement in the last Qualifying Heat, Tom Joyner (Zanardi-TM Racing-Vega) had to wait for the Prefinal to join the top five. After a remarkable start in the Final, he was leading the race from the third lap. The young Dutchman Richard Verschoor (Exprit-Vortex-Vega), the poleman from Qualifying Practice, first challenged his leadership before dropping back and Ben Hanley (Croc Promotions-TM Racing-Vega), after dominating in the Heats and in the Prefinal, tried to dislodge him from the lead. Joyner however ensured his victory against Hanley, while the American Juan Correa (Energy-TM Racing-Vega) concluded in 3rd place, his best performance of the year in KF. Verschoor, disappointed, finally took 4th place with the fastest time of the race ahead of Nicklas Nielsen (Tony Kart-Vortex-Vega) who belatedly found his usual level of performance. Pedro Hiltbrand (CRG-Parilla-Vega), long in the lead group in the category in the top three, finished 6th.

Hanley slightly increases his lead in the championship against Joyner - 65 points against 52 - and Felice Tiene is distanced in 3rd position ahead of Correa and Verschoor.

Martono and Quinn shine in KF-Junior

After the fastest time achieved by Konsta Lappalainen (Tony Kart-Vortex-LeCont) ahead of Presley Martono (Tony Kart-Vortex-LeCont) during Qualifying Practice, Rasmus Lindh (Ricciardo Kart-Parilla-LeCont) regained the advantage after the Qualifying Heats, Clement Novalak (Tony Kart-Vortex-LeCont) was in 2nd position ahead of Martono and the Spanish Driver Marta Garcia Lopez (FA Kart-TM Racing LeCont), selected by the FIA "Women in Motorsport" Commission. The Indonesian Martono and Briton Alex Quinn (CRG-Parilla-LeCont) then settled in the top two of the Prefinal and recurred in the same order in the Final. Ulysse De Pauw (BirelART-Parilla-LeCont) had however held the lead early in the race, Quinn then spent time in the lead after mid-race, but Martono, the fastest on the track, had definitively taken over the controls four laps from the finish. Delayed in the Prefinal, Novalak remade the ground lost in the Final to climb on to the third step of the podium. Victim of a retirement in the Prefinal, Lindh completed an extraordinary rise of 24 places to join the top 10 in the Final.

After a bad start but eventually returning to 7th position after many hazards, Kenny Roosens (Kosmic-Parilla-LeCont) still retains the championship lead with 44 points, followed now by Novalak (38 points) and Martono, tied with Christian Lundgaard (36 points).

After hard-fought races in England, the titles are far from decided and it will not be until the third and final Competition on the calendar, held in Sweden in five weeks, that we will know who the 2015 Champions are.