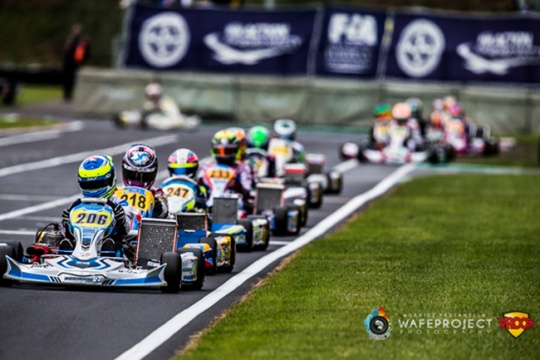 Author: Vroomkart International
Both drivers grabbed three wins and 2nd place in the heats to start the final phase of the CIK European KF-KFJ Championships from the best position on grid.

The mood in the paddock at PF International, host of the 2nd round of the CIK European Championships for KF and KFJ is not a happy one. A low entry list (51 in KF and 57 in KFJ) spells only one thing - trouble ahead. In the very delicate moment that the new OK engine is on the launchpad and would need the support of all involved, the palpable feeling is that hell is going to break loose in the coming weeks.

Going back to the heats, in KF, next to the Brit, the Dutch Richard Verschoor also took three wins but closed the last heat in 6th after stopping the fastest lap in qualifying. Row 2 sees the Spaniard Pedro Hiltbrand (one win and three 2nd places) sided by Russian Alexsander Vartanyan, with Italy's Felice Tiene and Estonian Juri Vips starting from row 3. With two wins and a 4th Dane Nicklas Nielsen saw his chances of a good starting grid compromised when he was forced to retire in the last heat. He will start from P10.

In KFJ, the Swede will be sided by British driver Clement Novalak, while Indonesian Presely Martono and Spaniard Marta Garcia will share row 2. Despite two heat wins, Christain Lundgaard from Denmark will have to start from row 3 with local hero Alex Quinn next to him after recovering from a weird qualifying (fastest in his group but outside the 105% time limit).