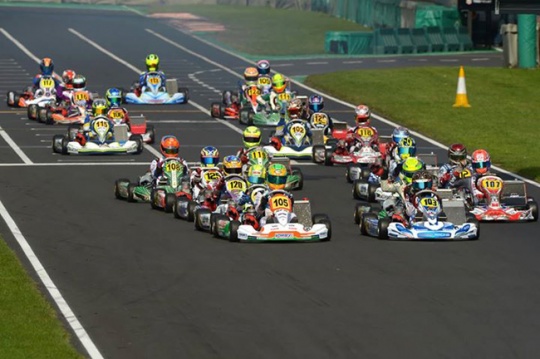 Press Release by: FIA Karting
Before its conclusion in Sweden in late July, the 2015 CIK-FIA European KF and KF-Junior Championship will move to the UK next weekend for a decisive step in the awarding of the titles.

The first Competition of the season at Portimao brought its share of surprises. Uncertainty reigns regarding the outcome of the races coming up at the home of British Karting, the famous PF International circuit.

Appearing on the CIK-FIA international calendar since 2010, the circuit founded by Paul Fletcher in Lincolnshire has constantly evolved to meet current standards. The track was first extended to 1382m in 2012 to add a spectacular crossover with a bridge. The infrastructure has also been brought up to date, and this year in a strategic shift it has been redesigned for greater safety. PF International is now a fine example of a successful blend of tradition and modernity, enlivened by the special charm of the British passion for motor sports.

In sporting terms, the Portimao track had already disoriented the participants in the European Championship, but in Britain they will have to show other qualities to succeed. 125 drivers are entered for the Competition, a number slightly higher than at the start of the season. The chances of ranking well in the Championship are always important, since the discounting of the two worst results (Qualifying Heats and Final) gives good opportunities for disruption.

Used with high satisfaction in Portugal, the new front fairing fasteners for limiting clashes are likely to actively participate in the sporting success of the UK Competition, playing a highly anticipated calming role.

Finally, the impact of the Competition will be enhanced by the choice of PFI for the world premiere of the new engines to be homologated from 2016.