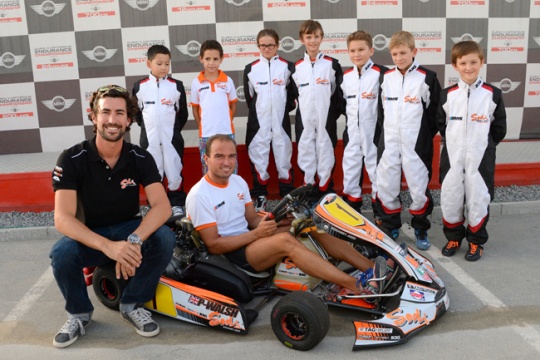 Press Release by: Sodi Kart
It was Mission Accomplished for the Sodi Racing Academy which came to life early in 2015 and gave young UAE based SWS drivers opportunity to test in Rotax Micro Max karts while being provided with expert tuition on racing and race-craft.
The concept was introduced on to the local karting scene by Sodi Racing and spearheaded by Nicolas Fargeas, head of racing operations for the team.
The first edition saw seven drivers - Kamal Agha, Seif Al Naggar, Luis Velasco, Archie Sampson, Fritz Holst, Seva Rachkovskiy and Alice Haynes - selected from the SWS ranks at Dubai Kartdrome and given twelve weeks of training, which included once a week stints in Micro Max karts under the expert tuition of Nacho Girona.
The objective was to provide the selected young drivers the opportunity of stepping up the ladder from the grassroots SWS Sprint karting series, to the more powerful Micro Max category karts with the goal of developing the drivers and ascertaining which drivers were ready to make a step-up in their kart racing journey
Fargeas explained, "Once we selected the drivers we then trained them weekly on Micro Max karts and also provided coaching during SWS race days. From there we established that three or four drivers were ready to step up the Micro Max and contest the UAE championship, while others need to focus at least one season more on SWS."
"In this manner we provided a cost effective way for parents and their children to sample what it takes to move up from SWS to Rotax. Some will move up to Micro Max, others will not. So from our side it is mission accomplished," added Fargeas.
Coach Girona said, "From the outset I told parents that any kid who was capable of doing consistent 65 seconds laps at the Kartdrome would be ready to move up into Micro. I am happy to say that four of them did this, with one even getting down into 64 seconds zone, which would have put him in the top five on the grid at the most recent UAE Micro Max championship round in Dubai."
Earlier this month the seven drivers were awarded certificates, during a 'graduation' event at the Kartdrome, for accomplishing the 12 weeks training and being part of the Sodi Racing Academy.
Fargeas concluded, "This was a very successful and satisfying programme for us. Our Sodi Racing Team, along with our partners, is set up to cater for young drivers, and our crew really enjoy working with them. It is very fulfilling to watch them mature and grow through the karting ranks."
"We intend continuing the programme ahead of the new 2015-2016 season which begins in September. We will be approaching parents of children we believe can benefit from the Sodi Racing Academy and we hope to again unearth some promising talent to progress up the ladder through the SWS Sprint race system."

Skulanov with CRG, soon the announced

Pierre Gasly: healed from COVID 19 but not from.. kart racing!

Champions Of The Future - 2021 calendar approved