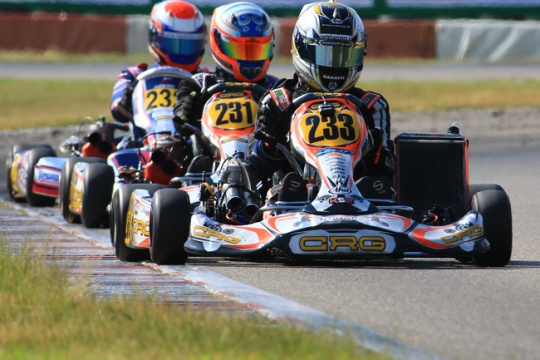 Press Release by: CRG
Davide Forè got two podiums in KZ2 and now is second in the DKM Championship. CRG dominated KF with the German Hannes Janker, while Martijn Van Leeuwen is second in the standings thanks to two podium finishes. Felice Tiene also strong.
The second round of the German DKM Championship held in Genk saw CRG drivers putting in good performances, as in the case of the double podium of Davide Forè in Race-1 and Race-2 in KZ2. Full haul in KF with the double win of Hannes Janker and important placings  for Martijn Van Leeuwen. Felice Tiene also under the spotlight.

DOUBLE PODIUM FOR FORE' IN KZ2
In Genk, circuit that will house the third and final round of the European Championship next 12 July, the two KZ2 finals have been quite exciting as Davide Forè put in a good overall performance. In qualifying the Italian driver of CRG supported in the occasion by Renda Motorsport, obtained a good third time in his group and then has always been among the quickest in the heats, securing the fourth place. He moved the two Finals to move his attack though: third in Race-1 and even better in Race-2 with P2. This double podium launches Davide Forè in the second position of the championship at 68 points, very close to Jorrit Pex, who won both Genk's finals and reached 75 points.
Among CRG drivers present at this important round of KZ2, Fabian Federer and Fabrizio Rosati, both on CRG-Maxter run by CRG Holland. In the heats, Rosati obtained a good placing in P15 and Federer was 17th out of the 62 drivers on track. Unfortunately, both drivers had to retire in Race-1. The two Italian drivers counter-charged anyway in Race-2, as Federer recovered from the back of the grid to the 10th place and Rosati secured another 17th place and 2 more points for the classification. The German Maik Siebecke of SRP Racing Team, has also been shining for CRG as he obtained a very good P4 in both Finals.

CRG DOMINATED KF
The Dutch driver Martijn Van Leeuwen of team CRG Keijzer Racing has been very quick since the beginning in KF. He was second absolute in the lap times and was also second after the heats, as Felice Tiene, put in a good comeback race from the P16 of qualifying to the third place in the heats, where CRG colors dominated the scene with 6 drivers in the top 7. After the second place of Van Leeuwen and the third of Tiene, the fourth place after the heats was in fact occupied by Hannes Janker, while Tom Lautenschlager was fifth, Will Stowell sixth and Benjamin Lessennes seventh.
The Finals were dominated by CRG colors with Hannes Janker (CRG-Parilla) of team TB Motorsport. Janker proceeded his team mate Martijn Van Leeuwen in race-1, as the latter closed second after leading the race early on. Lautenschlager was fifth and Tiene ninth.
The second Final has been also very exciting, as the German Hannes Janker lead all the way through winning the race as Martijn Van Leeuwen obtained an important podium with P3.
The good performance for CRG was rounded up by Felice Tiene, fourth, Benjamin Lessennes sixth after a comeback race, Tom Lautenschlager eighth and the Japanese Takuya Okada ninth at the end of good run.
The double podium obtained by Martijn Van Leeuwen in Genk, gave the Dutch driver of team CRG Keijzer the second place of the classification, at just 3 points from the classification leader Verschoor.

GOOD PERFORMANCE FOR CRG ALSO IN KF JUNIOR
CRG drivers of KF Junior obtained good performances in qualifying and in the heats. In particular, the Israeli Ido Cohen of CRG Keijzer Racing was fifth and the Dutch Max Tubben of CRG Holland was sixth. The best of CRG drivers in Race-1 was Tubben in sixth, as he led team mate Max Weering, and the German Esteban Muth of TB Motorsport ended ninth. Tubben put also in a good race-2, closing a good comeback in P5, as Weering was sixth and Cohen seventh.

The third round of the championship is scheduled for next 2 August in Germany at Ampfing.

All classifications are available at www.kart-dm.de/startseite/