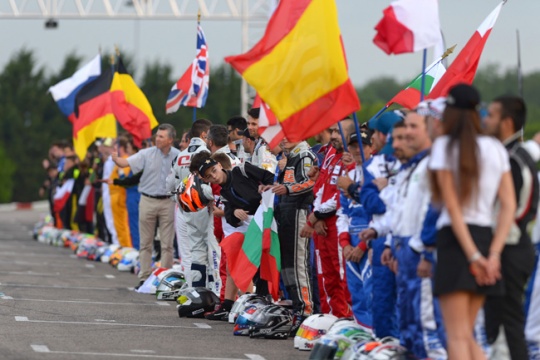 Press Release by: Sodi Kart
3MK Events, the organiser of the 2015 Sodi World Finals, has once again showcased the ever growing attractiveness of the Sodi World Series all over the world in managing the logistics of the event at RKC.
Unlike ordinary competitions, the rewards are more widely shared within the two unusually intensive days with 270 drivers from five continents and their escorts in large numbers. Thanks to the incredible quality of the 2015 Sodi World Finals, karting enthusiasts had the joy of racing in an unforgettable event.
The 100 brand new karts provided by Sodi were swapped between competitors each time out, to level out any small performance differences. Moreover, the machines are weighted according to the drivers weight so that everyone fought on equal terms. Finally, the two tracks of 1000m and 1200m, with very different profiles and the Cormeilles en Vexin site further expanded the possibilities. The progressively scaled points distributed in the Sprint Cup and Junior Cup increased the heat race after race, while giving time for newcomers to get used to the different tracks. The generally sunny weather gave way to rain on Friday night, to further vary the range of driving conditions.

Junior: Luff is consistent against Hahn
Driving their Sodi LR5, the participants in the Junior Cup for ages 11 to 15 saw their numbers rise from 20 in 2014 to 36 this year. Germany's Felix Hahn began with victories on the first day, but then his supremacy was challenged by Britain's Matthew Luff, while the French Bastien Flahaut like last year won the last race of the World Masters. Luff eventually topped the standings ahead of Hahn and the young Frenchman Rémy Goville, rewarded for his consistency.

Sprint Cup: Caprasse impressive
The Senior Sprint Cup alternated between the effective Sodi GT5R and the powerful Sodi RX250 to decide the result. The Belgian Kevin Caprasse, 7th in 2014, achieved his overall victory by winning the first four races and then taking the title against the French driver Julien Azzopardi. 3rd place went down to the wire in the super final of the World Masters. The Belgian Simon Delvenne took a great victory, and his compatriot Mathy Vanbrabant was on the third step of the podium.

Endurance: World triumph for the Pastina Veneto Corse
Organized from midnight to noon on the Sodi RT8, the Endurance Cup was won by the Italian team Pastina Corse Veneto, led by Damiano Marchesan, just 15" ahead of the Belgians Modave Racing PPS after 648 laps, or 777 km. 3rd place went to the Emirati team CG Pro Racing, 2nd in 2014, ably assisted by David Terrien who remained at the wheel for more than 6 hours, Batelco (BHR) finished 4th like last year and BG Racing (Technikart-France) was 5th, all on one lap. The team CER ASK Karting of RKC took 6th place having long fought in the top three. The Alfa Romeo Team, 8th in the standings, set the fastest time of the race.

Beyond the final victories, the pleasure of all the participants was the main goal. Between the Sprint Cup, the Junior Cup and Endurance Cup, 120 prizes were distributed to 62 different drivers including 26 winners and 40 podiums during the meeting. The awards ceremony of the 2015 Sodi World Finals took place at a particularly popular celebration evening.