Author: Vroomkart International
The Crg Maxter official team driver and undisputed leader of the WSK Euro Series in KF3 talks about himself.
The young Dutch driver – he is not 13 yet – and son of the former F1 driver Jos Verstappen is the new WSK Euro Series champion. He has been dominating the season since its very beginning, and he is now ready for a brilliant future. His dream? The F1, of course!
Desenzano del Garda ( 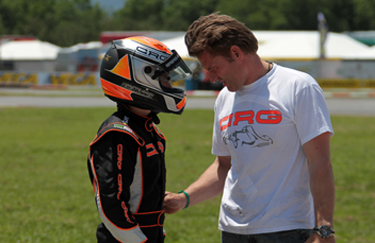 Brescia – Italy) 9th June 2010. Among the young drivers who have stepped to the fore in the WSK Euro Series in 2010, Max Verstappen, doubtlessly, tops the bill. He has immediately showed his qualities, despite his young age – he will be thirteen next 30th September and he can take part in the KF3 races thanks to the new international regulation.

Son of the former F1 driver Jos Verstappen, who was karting European Champion in the 100 ICA in 1989, Max definitely got the talent of a real champion.
His professional attitude on the paddock is accompanied by a great confidence. He is very determined during the race, especially in the overtaking phase, but at the same time he is a skilful tactician, perfectly aware of how tricky scuffles can be –and scuffles are a staple ingredient in such a young and lively category like KF3. He is sensible and endowed with good manners, a great sense of respect for his competitors but at the same time he is an outstanding fighter. He is definitely a fully-fledged champion!

This is the year of his début in the WSK, after winning all the junior national championship he took part in in Belgium and the Netherlands: Mini, Rotax Mini Max, Cadets and KF5. In the WSK, in KF3, his pace gave his competitors no chances: he has practically always managed to step on the podium, both in the finals and the pre-finals, achieving 5 wins on 10 races, besides two second places and two third place. These are outstanding results, especially in a tricky and demanding category like the KF3.

With Jos Verstappen as father, his future is already sketched: car-racing is just round the corner, then the next step brings directly to the F1. When we asked him about his dreams for the future, his answer was rather obvious and immediate: “Being a F1 driver!”

For the time being, he got his first International trophy and here is his first comment on the first part of the season. “Winning the WSK Championship was a great result – says a joyful Max Verstappen – and I’m very happy also because this is my first year of international competitions. I still have a lot to learn, but I’m glad of how things have been going so far.”

Did you expect to get such good results in KF3?
“Actually not from the first year, but after the winter tests I was aware that I could get good results and run my races at excellent levels Then the first wins arrived, and consequently I found myself battling for the championship.”

What do you have on schedule now?
“This year I’m taking part in the KF3 European Championship again. I qualified for the 11th July final at Genk; then there are the KF3 World Cup on 12th September at Braga and the three meetings of the WSK World Series. Next year I think I will take part in the KF3, because of my young age. Then I think that my father will take me directly to the Super KF”.

How important is your father for your results?
“He is fundamental. He helps him a lot: he is a rock! He assists me on the track during each phase of the race and gives me lots of advice.”

Which is the win in the WSK that you remember better?
“The one in Spain, at Zuera. It was a gripping race and it was fundamental for the Championship. It was really special: there I won the final and the pre-final after recovering from the back positions in both the races.”
How is school going?
“Fine. I’ve just finished my first year of high school in Belgium”.

Do you manage to have any hobbies?
“I like mini-motorbikes and football. But the races are really demanding in terms of time and are on top of my list".”