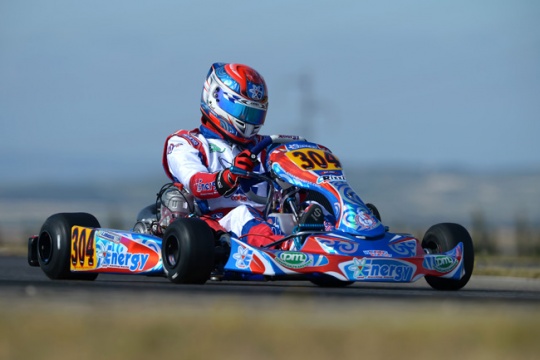 Press Release by: Energy
Both fast and technical, the Zuera circuit clearly highlighted the performance of the Energy-TMs at the second round of the European KZ2 Championship.
In Spain, the Italian Energy Corse team placed its two drivers Joel Johansson and Sean Babington in the top 10, the Swede even finishing his superb performance on the 2nd step of the podium. Good work!

Energy Corse continues to export its know-how, experience and highly professional structure to all of the circuits that the team of Mick Panigada visits during the seasons. Used to fighting for the top positions in every European KZ2 Championship, he didn't fail in his mission on 23rd and 24th May in Zuera. In timed qualifying, Joel Johansson and Sean Babington respectively took 3rd and 9th fastest times. Johansson confirmed with two wins and no problems in the heats, helping him to 4th place in the prefinal.

A deserved podium
There was a superb duel in the final between the leading men. Thanks to an effective and consistent Energy chassis, Johansson fought to the end to clinch 2nd place, with the second fastest lap. "In Italy, it was a shame to miss the podium after having progressed. This time I was able to achieve it, it's nice and a great reward for all the hard work by the team." The Swede moved directly to 2nd place in the provisional classification of the European Championship, before the planned conclusion in July at Genk (Belgium).

As for Sean Babington, he alternated with very good results in the heats with two superb second places, but also suffered two retirements. He took advantage of Sunday to move up the hierarchy. He gained nine places and finished 13th in the prefinal and progressed to the 7th position in the final. First encouraging points for the British driver!

Young drivers full of Energy
Several very positive results have been added to Energy Corse's CV in recent weeks. The 2015 WSK Super Master Series ended with a beautiful formation finish in the final standings of the 60 Mini category: 2nd place for Mattia Muller, 5th for Mattia Michelotto and 8th for Francesco Crescente through the work of Noviello Engine and Giugliano Kart. Both teams were also highlighted at the opening round of the Italian Championship in Triscina: there was a double in Mini for Biagia Ruvolo ahead of Mattia Michelotto and victory for Stefano Cucco in KF in Race 1.

At the German Championship at Wackersdorf, the Danish team TK Racing shone with the Energy brand: Patricija Stalidzane was ahead in the qualifying heats in KF Kunior, before running out of luck in the first final. But in KF, Nicolai Kjaergaard took 3rd in the two finals with great skill.
The Energy Corse team was less successful in the European Championship at Portimao (Portugal). After a spectacular comeback, the Spaniard David Vidales was due on the KF-Junior podium before a collision for which his rival was held responsible. The American Juan Correa finished his final in 11th position after moving up 10 places.