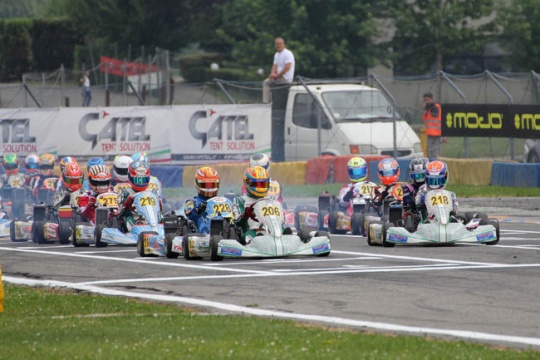 Press Release by: RGMMC
After two days of qualifying phase only the best drivers took part in the decisive finals. In the end Dean MacDonald (juniors), Richard Verschoor (seniors), Paolo DeConto (DD2) and Cristiano Morgado (DD2 Masters) celebrated the victories on Italian soil.
In the prefinal of the juniors, pole sitter Dean MacDonald (Aim Motorsport) managed the best start, while his teammate Fin Kenneally (Aim Motorsport) boosted himself into second place. The British duo from Aim Motorsport pulled away from the rest of the grid and controlled the lead easily. Although MacDonald was under constant pressure by his chaser, there was no successful move to come, endangering his victory. In the end MacDonald crossed the finish line first by a gap of only 0.076 seconds ahead of Kenneally. Third position went to Axel Charpentier (Strawberry Racing) in front of Scott Symons (KR Sport) and Alex Quinn (CRG SPA).

For Dean MacDonald the final did not prove to be a walkthrough. This time Fin Kenneally and Alex Charpentier were ready to take the battle. So the three drivers headed away from the grid and arranged the win among themselves. They showed some breath-taking race, which each of them was able to lead for at least one time. There was no decision until the very last lap. MacDonald, who was leading at that point, however did not make any mistakes on the last metres and defended his position up to the finish line ahead of Charpentier and Kenneally. Forurth place went to Frenchman Jean-Baptiste Simmenauer (Strawberry Racing), while Kiern Jewiss (Strawberry Racing) made his way up to fifth position. That was a quite remarkable job since he reached the qualification only by the second chance heat before he already did a great job in prefinal, in which he finished eighth. In the championship table Alex Charpentier took the lead ahead of Kiern Jewiss and Dean MacDonald.

The senior's prefinal was really exciting. After a few laps up to ten drivers, lead by pole sitter Pierce Lehane (Strawberry Racing) made demands for the victory. So Lehane had to struggle hard to keep the pack behind. But that was not easy at all, since Rinus van Kalmthout (Daems Racing) took the lead by halftime. When Lehane tried his counter strike, the battle got more heated, resulting in a collision which threw the championship leader back to 15th place in the end. On the top Rinus van Kalmthout kept cool and defended the lead bravely against Jordan Lennox Lamb (BirelART/KMS), who finally took the second place. Sam Marsh (Dan Holland Racing), Brett Ward (Aim Motorsport) and Edward Brand (CRG SPA) saw the chequered flag in the following positions.

A big surprise was to come in the final race: Richard Verschoor (Team TKP), who had been excluded in qualifying, was in brilliant shape. After having picked up the prefinal from 18th place, he improved to 8th position. From that spot the Dutchman boosted himself quickly to the top of the senior's grid in the final. After he gained the lead he was even able to increase the gap to his chasers, finally taking an impressive win. Second place went to Rinus van Kalmthout in front of Jordan Lennox Lamb, Leonard Hoogenboom and Spain's Mauricio van der Laan (CRG SPA), while Pierce Lehane recovered from his unfortunate prefinal result by finishing in seventh spot, which helped him to defend the championship lead.

As he had already proven during the heats, Paolo DeConto (CRG S.P.A.) was strong in the prefinal, too. He made the best start while only Ferenc Kancsar (BirelART/KMS) seemed to be able to follow the Italian. During the first laps Kancsar kept in the leader's slipstream but towards the end DeConto increased the gap constantly and took a controlled victory. Kancsar gained a secured second position ahead of Anthony Abbasse (Sodikart), who made his way up to third place. Rasmus Markkanen (VRT) and Austria's Max Hofer (Speedworld) completed the top five of the ranking.

In the final Paolo DeConto complemented his dominant performance. Again none of his opponents was able to keep the pace of the CRG manufacturer driver. Consequently DeConto celebrated a clear start-finish victory again. The best supporting roles were played by Ferenc Kancsar, Anthony Abbasse and Rasmus Markkanen who had a long and tough fight for the podium positions. In the end Kancsar took the second place ahead of Rasmus Markkanen. Abbasse took the fourth place but was excluded after the race due to a technical non-conformity. So Germany's Marcel Schirmer (RS Competition) inherited the fourth place ahead of Max Hofer, completing the top five results. Due to his exclusion, Abbasse even lost the championship lead. Now Ferenc Kancsar owns the top position ahead of DeConto and Schirmer.

As for the DD2 Masters Cristiano Morgado (Sodikart) took a secure double win. In the prefinal Tamsin Germain (DG Racing) and Martin Pierce (Rotax Praga Racing Team) followed in second and third place. In the final Igor Mukhin (CRG S.P.A.) made his way up to second position, pushing Pierce to third place of the podium.

Now the ROTAX MAX Euro Challenge has reached the halftime of the season and is going for a small break. But from 20th to 26th of July Europe's most original ROTAX series heads for the third round of the year, giving its Comeback in Germany on the modern circuit of the Prokart Raceland at Wackersdorf. This venue will herald the final spurt of the season, focussing on the top candidates for the 2015 championship crowns. So stay tuned on the official website www.rotaxmaxeurochallenge.com or rgmmcmedia.com, where you get all information regarding reports, photos, results and live TV stream.