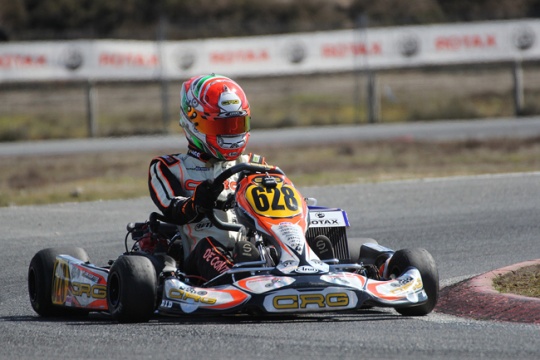 Following the opener of Salbris in France, the round of Castelletto is going to be quite interesting mainly as regarding the standings as the round is the turning point of the season ahead of the final sprint of the two rounds of Wackersdorf (26 July) and Genk (6 September).

CRG team will be present in Castelletto with its full lineup led by team manager Martin Reuvers with the support of HRS Racing Engines regarding preparation and technical development of engines. In the most performing category, DD2, the Italian outfit will field its two top drivers: the two times KZ1 and KZ2 European champion Paolo De Conto and the young German Luka Kamali,  as both drivers got good placings in the first round of Salbris. De Conto is currently 9th in the standings, while Kamali is 16th.

The Russian Igor Mukhin will get on track in DD2 Master, after the great second place scored in Salbris.

Expectations are high in Senior category for the performance of Edward Brand (who was third last year in Euro Rotax Senior), of his fellow countryman and reigning champion Harry Webb, and of the Spaniard Mauricio Van Der Laan, as these three will have great potential to recover some ground after the placings obtained in Salbris.

The very young British driver Alex Quinn, already protagonist in the International CIK-FIA series, turned out to be very quick also in the Junior category. Alongside Quinn, CRG will also field some other interesting youngsters like the Israeli Ido Cohen,  the Spaniard Kilian Meyer and the Swede David Rehme. In Salbris, Quinn has been the quickest of this lot as he just missed out on the podium ending fifth absolute.

Results, Live Timing and Live Streaming will be available at rotaxmaxeurochallenge.com.