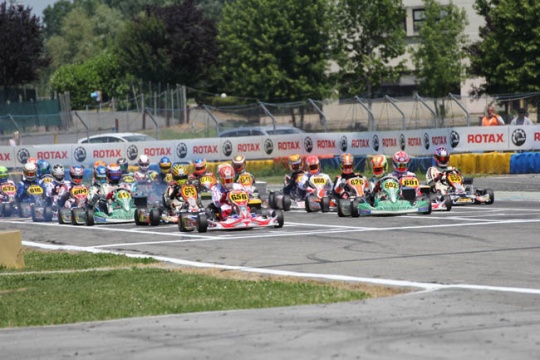 Press Release by: RGMMC
This weekend, the ROTAX MAX Euro Challenge is in Italy for its second round of the year on the beautiful track of "7 Laghi" at Castelletto Di Branduzzo.
For the third consecutive year Europe's most popular ROTAX series visits the country of dolce vita and motorsport passion, which equally is the sporting and economical home of modern kart racing.

The 1.256 metres long track does not only provide perfect facilities but is quite popular with the drivers for its demanding and diversified characteristics. As its name implies (seven lakes) the complex is situated right within a lake district not too far away from Milan, which offers a good opportunity to combine a few days of holiday with the racing weekend. No wonder that the feedback is great. The organising RGMMC is proud to welcome about 30 nations from all around the world in the fully booked grids of juniors, seniors and DD2.

Having a look at the upcoming competition, the opening round winners are the ones to be beaten: In the junior class Jack McCarthy (Strawberry Racing) took the maximum of points at Salbris (FRA). For sure he aims to tie in with this success in Italy. But his hardest opponents come from his own team: The British duo Kiern Jewiss and Axel Charpentier (both Strawberry Racing) are close behind in the championship table.

When it comes to the seniors one name stands out of the pack: Australia's Pierce Lehane (Strawberry Racing) is the pacemaker thus far. The Tony Kart-driver won the ROTAX Winter Cup in February and celebrated a double victory during the opening round in France. So the question is, who will be able to beat the man from down under? Best chances can be certified to his teammate John Stewart (Strawberry Racing). The driver from the UK followed Lehane like a shadow in Salbris, consequently taking second place in the championship ahead of last year's junior Berkay Beslar (Bouvin Power) from Turkey and Jai Nijar (Strawberry Racing) from the UK.

Highly balanced racing is expected in the direct drive category of DD2: After a breath taking show during the final race at Salbris Frenchman Anthony Abbasse (Sodikart) took the win on home soil but that was far away from being a clear decision. Up to five drivers – including Hungary's Ferenc Kancsar (BirelART/KMS), Dutchman Mats van den Brand (VPDR), Kevin Ludi (Spirit Racing) from Switzerland and Germany's Marcel Schirmer (RS Competition) – formed the leading group, of which each driver had the chances and skills to win.

All in all the ROTAX MAX Euro Challenge is best prepared for its second round of the season, which promises an exciting show at "7Laghi". Everybody is invited to join the race action, as live TV coverage will start on Friday and continue throughout the weekend. So stay tuned on the official website www.rotaxmaxeurochallenge.com or rgmmcmedia.com, where you get all information regarding reports, photos, results and live TV stream.