Great expectations for the last event of the season. The CRG official team is the favourite one for the win in two championships on four, in KF3 and KZ1. Crg’s drivers are ready for a great performance also in Super KF and in KF2 with Michelle Gatting

Desenzano del Garda (Brescia – Italy), 1st June 2010. The great show of International karting of the Euro WSK ends this weekend on the International Circuit Napoli at Sarno (Italy) with the fifth and last event of the season. There are still four championships to be assigned in the KF1, KF2, KZ1 and Super KF categories. The CRG-Maxter official team stands great chances in two of these championships: with the young talent Max Verstappen in KF3 and Jonathan Thonon – who has already been World Champion more than once – in KZ1.
With the start of the free practice on Wednesday 2nd of June, the final rush of this great championship begins: a championship uncertain and gripping until the end, with lots of young promising drivers and the strongest champions at international level.
After the four first events, the two Italian ones at Muro Leccese (3rd March) and Lonato (28th March), and those in Spain and Belgium (Zuera – 18th April and Genk – 9th May), only the last laps on the track of Sarno on Sunday 6th June will decide the winners of the first edition of the WSK Euro Series.

The young talent Max Verstappen (who will be 13 on next 30th September) is the favourite driver for the final win in KF3. He just needs four points between final and pre-final to put his hands on this title too, after winning in the past years all the Belgian and Dutch junior championships he took part in.
This year, Max Verstappen (son of the former F1 driver Jos Verstappen, who was an excellent kart driver too and who was 100 ICA European Champion in 1989) has been performing at terrific levels, winning 5 of the 8 races (finals and pre-finals) he has run so far: he achieved a double win at Muro Leccese, a success at Lonato and – again – a double win at Zuera. In the last double race of Sarno, with 65 points to be assigned, Verstappen can just control his competitors and administer his 62 points advantage over the runner-up, the English driver Alexander Albon. 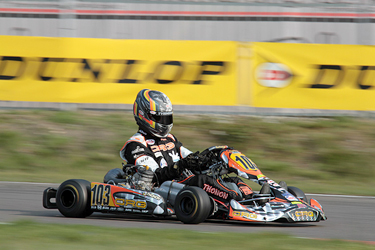 
In the most powerful category too, the KZ1, CRG’s goal is the conquest of the title in the top category with gear shift. The Italian firm has played a leading role since the very beginning of the season, thanks to its performing chassis and the reliability of the Maxter engine. With the double undisputed win achieved on the last race on the track of Genk, Thonon is now the new leader of the Euro WSK ranking with an advantage of 25 points over the Dutch driver Bas Lammers. They are the only two competitors left for the final win. So, the KZ1 championship will be decided on the track of Sarno and it is on this very circuit that Jonathan Thonon last year won the KZ1 World Cup for the third time in a row. Thonon will be able to count on the help of the American driver Gary Carlton, who is rather familiar with the southern Italy circuit and who was among the protagonists of last year’s World Cup.

In Super KF at Sarno CRG will be focused on the set up of the engine, because of the next events of the new series WSK World, due to start next 3rd of July on the circuit of Portimao in Portugal.
In this event too, the reigning world champion Arnaud Kozlinski will be the standard bearer for CRG together with Davide Forè, Felice Tiene and Eddy Tinini. 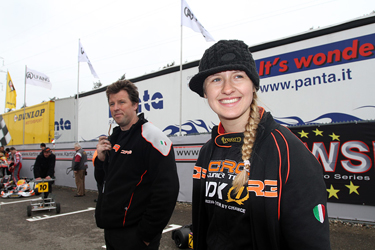 
In KF2 the end of the season is mainly focused on Michelle Gatting, top driver of the CRG Junior Team and brilliant protagonist of the present season. The Danish girl has just come back from her great third place in the Asian Pacific Championship held in Japan, and this time she can achieve an outstanding position in the championship. She is fourth in the general ranking, 22 points under the third (her country-mate Moller) and 30 points under the second (her other country-mate Nortoft)