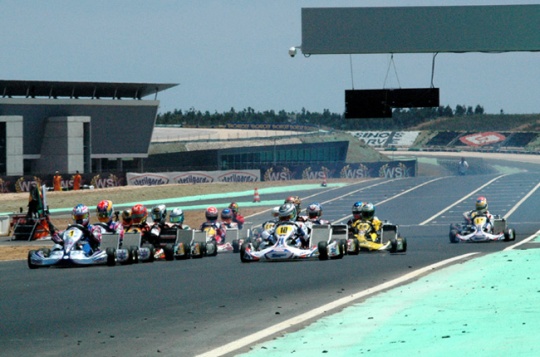 Press Release by: WSK
The European CIK-FIA KZ and KZ2 Championship started only two weeks ago in Italy and it is already time for the young KF and KFJ drivers to get on track.
They will take part in the next season-opening race of their European Championship. The event is scheduled for next weekend at the International kart-track do Argarve in Portimao (Portugal). Also this Championship will take place over three rounds: after the Portuguese season-opener, the other two rounds are scheduled in Great Britain, at the PFI circuit of Grantham from 18th to 21st June, and at the circuit of Kristianstad in Sweden from 23rd to 26th July. As usual, it will be possible to follow the finale of the event on 10th May – starting with the drivers’ parade – thanks to the live streaming available on cikfia.tv and cikfiachampionship.com. The following week the appointment is on Motors TV for a special TV report of the whole event.
All the protagonists in Portimao
There are 125 entrants to the season-opener in Portimao, all eager to battle and to aim at victory throughout the four days of the event on the 1,531 metres of the Portuguese track. Both the reigning champions of the two categories - Callum Illot (KF) and Enaam Ahmed (KFJ) – have moved to car-racing, giving way to the quest for the next champions. In KFJ there are several promising new names, who have already made themselves conspicuous during the first part of the season. Among them the British Clement Novalak (Tony Kart-Vortex-Le Cont), the new WSK Master Series champion, the American Logan Sargeant (Fa-Vortex-LeCont), the Belgian Ulysse De Pauw (Birel Art-Parilla-LeCont), the Swedish Rasmus Lindh (Ricciardo-Parilla-LeCont), the Russian Artem Petrov (DR-TM-LeCont) and the Brazilian Felipe Drugovich (Kosmic-Vortex-LeCont). In KF, there is going to be a new duel between the Polish Karol Basz (Kosmic-Vortex-Vega) and the Danish Nicklas Nielsen (Tony Kart-Vortex-Vega): the first round was won by the latter, thanks to the first position achieved in the WSK Super Master Series. The European Championship will be the ideal ground for a rematch between the two top drivers. Other protagonists of the event are the Italian Felice Tiene (CRG-Parilla-Vega), who is in great shape, the Dutch Martijn Van Leeuwen (CRG-TM) and the Russian Alexander Vartanyan (Tony Kart-Vortex-Vega).