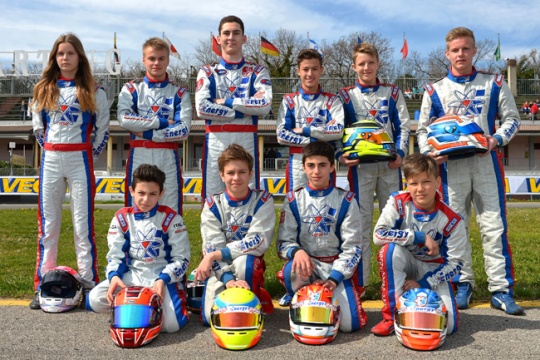 Press Release by: Energy
Energy Corse remains one of the most successful teams in recent years on the international scene, especially in KZ2.
Each year the team, managed masterfully by Mick Panigada, is on the lookout to fight for the European Championship title in this always popular category and has been very well rewarded (five crowns since 2004). In 2015, this event began in Italy in Sarno, where the Swede Joel Johansson was a candidate for the podium ...

With all five heats completed in the top four, including a 2nd place with the fastest lap, Joel Johansson seemed confident after the qualifying heats. "I know the Energy Corse team, and it always impresses me with its perfect organisation and standard of equipment preparation," enthused the talented Swede at the opening of the European Championship.

At the foot of Vesuvius, Johansson continued his magnificent performance in the prefinal, where he held on to his 5th place. "I was ideally placed on the inside in the final, but an opponent pushed me on the first lap, dropping me to the back. Although the driver was given a penalty, it is sad to lose the opportunity to fight for the podium," lamented the Energy Corse driver.

Babington from Rotax to KZ2
The benchmark in the Rotax Senior and DD2 in recent years, the Briton Sean Babington is learning KZ2 with great verve. Running with the Energy UAE team Babington benefited from the advice from the factory team at Sarno. "Despite his lack of experience of the class, Sean finished all his heats in the top 10 and easily qualified for the finals. He has great potential," said team manager Mick Panigada. While he was close to the top 10 in the final after gaining 10 places and posting excellent lap times, he was unfortunately forced to retire.

A successful Margutti Trophy
The Energy Corse brand also shines in many other events and many other countries. At the last Andrea Margutti Trophy for example, Spain's David Vidales confirmed his growing strength and the performance of his Energy-TM to take 3rd place in KF-Junior. His Danish teammate Frederik Vesti finished a few lengths behind in 6th position. As for the Lithuanian Rokas Baciuska, he took an encouraging 8th in KF.

The Energy chassis were equally competitive in 60 Mini with 4th and 5th places for Francesco Crescente (Noviello Engine) and Mattia Michelotto (Giugliano Kart). Also in this category, Mattia Muller (Noviello Engine) was on the podium at the third round of the WSK Master Series Super at La Conca.