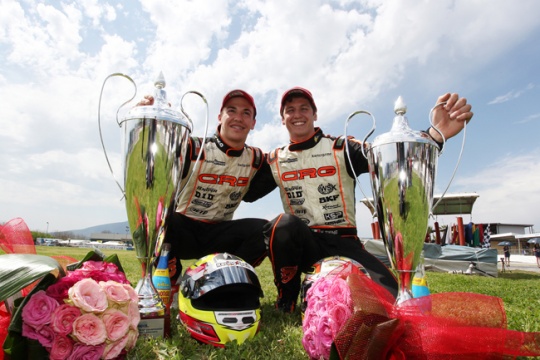 Press Release by: CRG
Pedro Hiltbrand and Felice Tiene got the podium in the European KZ2 Championship.
CRG chassis successfully placed 4 drivers in the top 6. Simo Puhakka was the quickest in KZ with the sixth final place.
Excellent epilogue for the European KZ2 Championship in Sarno for CRG colors. At the International Circuit Napoli of Sarno, Pedro Hiltbrand and Felice Tiene obtained a great second and third place in the Final of the first round of the European CIK-FIA Championship, both on the new CRG Black Wheel chassis and Maxter MX-S engine.

The race of all CRG finalists in KZ2 has been spectacular, as it ended with the result of the Spanish Pedro Hiltbrand who put in a stunning recover from P13 in the Prefinal up to the second place in the Final, as did Felice Tiene who ended on the podium in P3 following the 8th place of the Prefinal.

Four CRG chassis ended therefore in the top 6, which is quite a positive result that makes the team hopeful ahead of the remaining part of the European Championship, that will resume in Zuera (Spain) next 24 May and then will move to Genk (Belgium) on 12 July. The Final was won by the Dane Andreas Fasberg.

The standings of the Final saw also Riccardo Negro (CRG-Tm), supported by Renda, in P12 and Benjamin Tornqvist of CRG Holland in 19th place. Pasquale Tellone was forced to an early retirement instead after getting access to the Final thanks to the second place in the second chance race. Team SRP's driver from Russia Maxim Martynyuk also retired early on in the race.

The other two youngsters completing the CRG lot of KZ2, Fuma Horio and Fabrizio Rosati, did not manage to go beyond the second chance race but their experience has been positive anyway.

PUHAKKA RECOVERED ALL THE WAY TO P6 IN KZ

In KZ the results for CRG have not been as positive even if the speed was actually there. The best has been again the Finn Simo Puhakka, also on CRG Black Wheel with Maxter engine, who recently won the WSK Super Master in La Conca, but in Sarno he has been forced to a comeback race. Puhakka ended with a good P6 at the end of a nice comeback from P11 of the Prefinal, while  Davide Forè ended in the top ten with a productive P10 even if that did not satisfy much the Italian driver. Paolo De Conto ended 13th instead, but he also had a troubled weekend, which is quite peculiar due to his unquestionable speed. The exiting European KZ2 Champion, Andrea Dalè also on CRG-Maxter had to retire after being involved in an incident also in the Prefinal. The Final was won by Flavio Camponeschi.

In a few days time drivers will get on track again in Sarno for the fourth and last round of the WSK Super Master Series, and CRG protagonists will have their chance to counter-charge.

Pedro Hiltbrand: “I had a technical problem in qualifying and I therefore had to start the heats from the back, but I managed put in some good runs and to get back some ground. In the Final, I realized soon after the start that we got a great setup both regarding chassis and engine. Everything was perfect and I though I could make it, I pushed hard and gained a lot of positions getting back on to Fasberg. I am quite hopeful ahead of the next round to be held in Zuera (Spain), a track that I know very well.”

Felice Tiene: “I am quite happy, but I had a problem with the water temperature that slowed me down. If it was not for this, I think we could have won. Starting from lap three my radiator leaked some water and the temperature raised to 110 degrees. Every time I was shifting, my engine was not pushing, but this is quite normal with this kind of problems. Things went well and I managed to finish the race though. Regarding the championship, this has been a great result and a positive one also for CRG that saw two of its drivers in the top three. I think that thanks to this third place I will have the chance to be among the candidates to the final win of the European KZ2 title.”