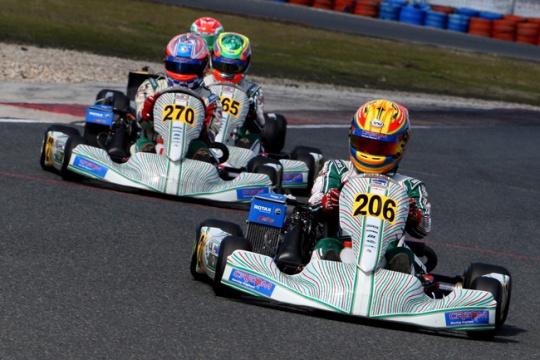 Press Release by: Strawberry Racing
Salbris staged the curtain-raiser to the 12th edition of the super-successful Euro Max Challenge and the French circuit once again proved to be a happy hunting ground for Strawberry Racing.
Attracting 160 competitors, full grids and plenty of action was thus assured. This, along with the changeable weather made the achievements of Jack McCarthy and Pierce Lehane far from easy, not that some observers saw it that way…

The sheer depth of talent the UK Rotax scene possesses quickly evidenced itself after timed qualifying in the Junior Max class. The top six drivers were all British and it was McCarthy who headed the time-sheets.

Using his P1 grid advantage, Jack dominated his heats and took a clean sweep of victories to seal pole position for the pre-final.

He was pressed hard in the opening stages, but maintained his advantage. As his rivals piled on the pressure, the chasing group, featuring Kiern Jewiss bore down on the leaders, ultimately making it a five-kart train. A little further back was French ace Axel Charpentier who was on a charge from 13th on the grid to an eventual 7th.

As the racing became more intense, McCarthy was pushed down the order - but fought back and was able to hold his attackers at bay to the chequered flag. Jewiss’ fine drive was rewarded with 3rd on the line.

Seizing the initiative from the start, McCarthy and Jewiss formed a breakaway, with the former never headed all the way to the finish. Similarly, Kiern had the chasing pack in the palm of his hand and cruised to the runner-up spot. The scrap for the last remaining place on the podium saw Axel just pipped on the dash to the finishing line but taking a good haul of points for 4th.

With his Winter Cup victory clearly still fresh in his mind, Senior Max star Pierce Lehane started as he meant to go on, by posting the fastest lap in qualifying. He then carried this form through each of his heats, winning all of them.

Readjusting well to life back in the Strawberry fold, the gifted Scot, John Stewart, took P4 for the pre-final. The pair then took control of the race and delivered a textbook lights-to-flag 1-2 finish for their team. Still, it was Stewart who led the way before Lehane popped out of his teammate’s slipstream, with three laps to go, and took first blood.

The main final saw Lehane and Stewart set the pace but came under scrutiny from a chasing duo – featuring another Strawberry driver, Jai Nijjar. Recovering from misfortune in the heats, Jai was on fire and moved into 3rd. Despite some last-lap fireworks, the order remained unchanged and Lehane led home Stewart and Nijjar in that order, to seal Strawberry’s first podium lockdown of the season.

Their young Dutch team-mate, Leonard Hoogenboom had made a decent fist of the preliminaries but found himself to the back of the field due to some of the on-track skirmishes. Also experiencing frustration were Ireland’s Gary Donnelly and new Finnish signing Antti Johansson. Both had endured difficult heats, which had put them into the Second Chance race.

Johansson’s 3rd saw him progress into the pre-final but Donnelly was classified 20th, despite a robust but sterling drive. Antti charged from the back of the field to claim 13th in the pre-final but came a cropper at the first corner of the main final. He was able to continue but could finish no higher than 28th.

Although racing on his own in DD2, Strawberry’s Constantin Schoell battled gamely against some of the sport’s biggest stars. Emerging from the heats in 11th place overall, the young Austrian was unfortunate to not translate his obvious pace into a better result and he finished the pre-final 18th.

His fortunes improved in the final itself, and he made up three positions to net 15th but having been 6th-quickest in qualifying, Constantin will be keen to show how he can translate his raw speed into higher finishes at the championship’s next round, at Castelletto in May (30-31).
For more information about the complete range of Tony Karts, OTK Race Wear and your nearest stockist, visit www.strawberryracing.co.uk, call 0114 288 9933, or email info@strawberryracing.co.uk 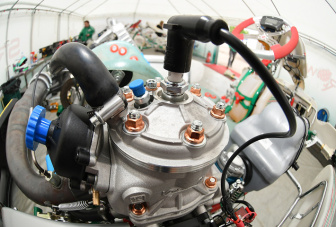 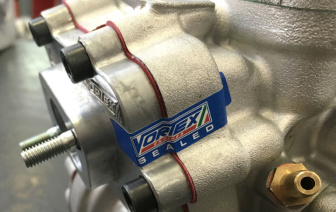 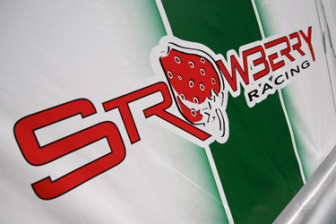