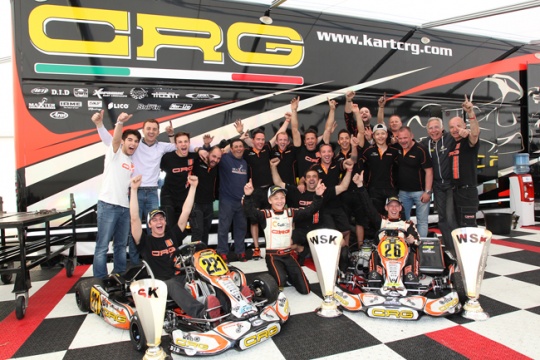 Press Release by: CRG
Simo Puhakka obtained a spectacular win in KZ2 on CRG-Maxter at the third round of the WSK Super Master Series held in La Conca.
Felice Tiene confirmed CRG competitiveness with a podium in KF, as Hauger was victorious in 60 Mini.
Stellar CRG in La Conca's third round of the WSK Super Master Series, race dominated  by Simo Puhakka in KZ2, on CRG Black Wheel chassis pushed by Maxter MX-S by Savard. Felice Tiene on the podium in KF on CRG Gem Start chassis powered by Parilla, Dennis Hauger of Team Gamoto victorious in 60 Mini on CRG Hero and TM engine.

STUNNING VICTORY FOR PUHAKKA IN KZ2
Everyone is happy especially for Simo Puhakka, who put in an extraordinary WSK weekend with a crescendo of performance that climaxed with the victory in the Prefinal and then in the Final, thanks also to a super-chassis, the new Black Wheel and to a Maxter engine that proved to be deservedly back on top in the shifter category. This superiority has been also highlighted by Paolo De Conto's performance. The Italian has been leading free practice and heats, ended then third in the Prefinal due to a contact with Ardigò at the start and then went off at turn one in the Final due to another violent contact with Lennox.

Davide Forè has to recriminate for a heat not run in KZ2 which slowed him down for the whole second part of the event, despite the great speed he displayed also in Sunday's warm-up right before the final stages. Forè ended 12th in the Prefinal and 7th in the Final. Fabrizio Rosati had to retire at the first lap of the Final, but his weekend has been positive anyway.

TIENE ON THE PODIUM IN KF
A solid performance has also been obtained in KF as Felice Tiene secured the podium on CRG Gem Star chassis, after being very quick throughout the weekend despite being slowed down in one heat. In his Prefinal, he gained some ground back and earned P2, while in the Final he confirmed his speed closing his effort on the third step of the podium. Pedro Hiltbrand, sixth in the Prefinal due to a 3 seconds time penalty, fought then like a lion in the Final, but a contact early on prevented him from going beyond a good final P9. The British driver Archie Tillett ended 14th instead, while the Dutch Martijn Van Leeuwen of team CRG Keijzer had to retire early on in the Final after shining since the beginning of the weekend. He ended 4th in the Prefinal.

In KF Junior, Muizzuddin Musyaffa Bin Abdul Gafar, on CRG KT2 chassis run by team Gamoto, ended 6th in his Prefinal, but had to give up his hopes to improve in the Final due to a contact. That was a pity as he had shown very good speed up to that point.

VICTORY FOR HAUGER IN MINI
Another victory in 60 Mini was obtained by Team Gamoto's very young driver from Norway Dennis Hauger at the wheel of a CRG Hero chassis. He has led the pack for the whole weekend and ended his effort with a spectacular win earned at the sprint to the line. This victory confirmed Hauger on top of the classification when only one race is left to the end of WSK, but on his result there is still a decision of stewards pending regarding a 10 seconds penalty due to unfair driving. Team Gamoto filed an appeal and the classification is therefore sub-judice.

Simo Puhakka's happiness: “Things went great. I have to say that I had a good start and I managed to get the lead since the beginning. Our material worked like a charm, driving was so easy. We found great solutions all around, chassis and engine were great. I would like to thank the whole team and Savard for the Maxter engine they provided. The whole CRG deserved this win, we have always been competitive. Next Sunday we are gonna be in Sarno for the first round of the European Championship. And after that weekend we will face the CIK-FIA European series confident to get a good result.”

Felice Tiene: “The podium is good for the time being, but we always race for the win. There still is something to improve, especially regarding engine power. What a pity for the previous rounds of Adria and Castelletto, on these tracks we have also been very quick but a series of inconveniences did not allow us to get what we would have deserved. In this race, exception made for an unlucky heat, we obtained a truly deserved third place.”