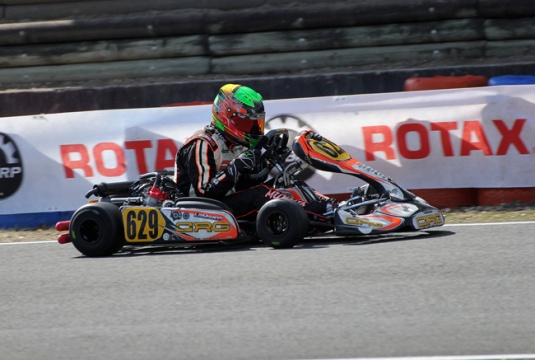 DE CONTO UNLUCKY IN DD2
The biggest hopes in DD2 were on Paolo De Conto, but the Italian driver, after posting the second time in qualifying of his group on the wet and the third time in a heat, hit some troubles in the other two heats due to the slippery circuit and was forced to the retirement by a failure to the cabling of his kart.  Paolo De Conto managed then to get some ground back in the Prefinal that he ended in P13 and closed his effort in the Final in seventh place. Eventually, he was pushed two positions down due to a contact with some rivals. Good race also for the German driver Luka Kamali, who managed to recover all the way up to his final P14.

MUKHIN ON THE PODIUM IN DD2 MASTERS
The Russian Igor Mukhin managed to get the podium with a great second place in DD2 Master, as he crossed the finish line behind Kawase Tomokazu and ahead of Tamsin Germain, also on CRG.

FIFTH PLACE FOR BRAND IN SENIORS
The Britons Harry Webb and Edward Brand, and the Spaniard Mauricio van der Laan represented CRG colors in Max Seniors. Webb has been the quickest in qualifying with the 19th absolute place, before putting in some great heats that gained him the absolute P6.
Brand put in a great Prefinal as he claimed a very good P4, while Van der Laan ended 12th and Webb was relegated to the back by a contact at lap one. Brand has been again among the quickest in the Final getting the 5th place, as Van der Laan ended 15th and Webb 22nd.

QUINN CLOSE TO THE PODIUM IN JUNIORS
The young British driver Alex Quinn, the Israelian Ido Cohen, the Germans Tim Mika Metz and Phil Dorr, the Swede David Rehme and the Spaniard Kilian Meyer represented CRG colors in Max Juniors instead. Alex Quinn has been very quick in the heats getting a good P9 after a stunning recovery from the 42nd place of qualifying, as did Ido Cohen, 14th after the 40th place  of qualifying. The other CRG drivers did not manage to pass the qualifying hurdle and ended behind in the heats. Quinn ended fifth in the Final, gaining five places from Prefinal, but he could have finished on the podium. Cohen ended 19th at the end of a good recovery from the 32nd place of the Prefinal.

The next round of the Euro Challenge 2015 is scheduled for next 31 May in Italy at the Circuit 7 Laghi of Castelletto di Branduzzo (Pavia).