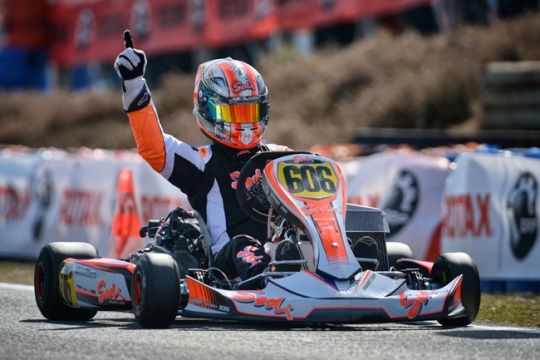 Press Release by: Sodi Kart
The Easter weekend was an opportunity for Sodikart to again highlight the potential of the 2015 Sodi chassis at European level in several categories and on different circuits.
During the first round of the Rotax Euro Challenge at Salbris Anthony Abbasse won the hotly contested Rotax DD2, while Vincent Fraïsse was prominent in the X30 Challenge Europa at Castelletto, becoming Vice Champion in Seniors.

Although geographically distant, the two competitions this weekend experienced the same kind of weather conditions, ranging from rain to dry through all the intermediate steps. In these varying conditions, the 2015 Sodi chassis demonstrated great versatility and ease of adaptation which enabled their drivers to shine.

At Salbris Anthony Abbasse gradually upped the pace to reach full power in the final where he won brilliantly against the top specialists in Rotax DD2. Thanks to his remarkable performance, Anthony took the lead of the championship. Less fortunate in terms of results, Kozlinski also showcased the performance of his equipment by posting the second fastest lap in the prefinal and the fastest lap in the final.

In Rotax Senior, two drivers from the Kart Racing Pro team also did well in their first race of the season. Adrien Renaudin, who was in his first race here in Senior, finished in 8th place by setting the second fastest time in the race, despite starting from 27th place in the prefinal. For his part, Nicolas Picot came up from 25th to 12th place in the final.

Meanwhile, in Italy, Vincent Fraïsse shone in the Senior category of the X30 Challenge Europa at the Castelletto circuit. Both in the deluge and the dry, he was constantly fighting in the lead pack and pushed to finish on the second step of the podium having achieved the fastest time.

Luca Midali, who set the third fastest time, suffered in the rain but came back to the top 10 in the final race. In Junior there was also major satisfaction with the rise of the young Teo Laforge to the top five in the category, followed closely by Julien Sanson in 7th position.

After the performance at the beginning of the year in international KZ, Sodi continues to make an impression in the two main brand challenges, Rotax and X30. These recent results reflect the commitment and ambitions of the French brand, the top worldwide kart manufacturer, which were to reconnect with the highest international level and provide all its customers with high-performance equipment, which is easy to use and capable of winning in any competition.