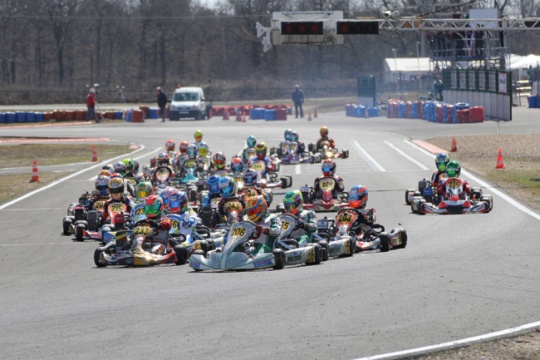 Press Release by: RGMMC
The opening round of the 2015 ROTAX MAX Euro Challenge is history: On Sunday the French circuit of Sologne Karting was venue of the first final races of the season.
After mixed conditions during the last days, sunny weather made for best race action in the end. Finally Jack McCarthy (juniors), Pierce Lehane (seniors), Anthony Abbasse (DD2) and Kawase Tomokazu (DD2 Masters) stood out from the 160 competitors, taking the first victories of the year.
The Junior prefinal seemed to develop into a fight between Jack McCarthy (Strawberry Racing), Oliver York (Aim Motorsport) and Javier Gonzalez (Paul Carr Racing). The trio took the lead and headed away from the grid, while Tom Gamble (Dan Holland Racing) who had picked up the race from second place, got off the track during a start collision. But after only a few laps Jordan Brown-Nutley (CRM) and Kiern Jewiss (Strawberry Racing) closed the gap to the leaders and set them under pressure. Consequently positions mixed a few times, including the lead. Oliver York and Jordan Brown-Nutley both were temporarily in the top position. But towards the end Jack McCarthy stroke back and defended the victory up to the finish line. Jordan Brown-Nutley had to put up with second place ahead of Kiern Jewiss, Fin Kenneally (Aim Motorsport) and Oliver York, who finally was pushed back to fifth place.
In the final Jack McCarthy and Kiern Jewiss set the pace, since Oliver York and Jordan Brown-Nutley dropped back to the end of the grid right after the starting phase. From then on Jack McCarthy was unbeatable and completed his double victory easily, while Kiern Jewiss took a save second place. A quite open case was the fight for third place. Up to twelve youngsters struggled in breath taking battle for the last podium place, which finally went to Dean MacDonald (Aim Motorsport) ahead of Axel Charpentier        (Strawberry Racing) and Alex Quinn (CRG SPA).

Quite unspectacular was the Senior prefinal. Pierce Lehane (Strawberry Racing) and his teammate John Stewart (Strawberry Racing) established themselves on the top, while the rest of the grid kept struggling the first laps. So the leading duo broke away visibly and drove a tactical race which most of the laps was lead by Stewart. But in the end Lehane's tactics worked out: After crouching behind his teammate he overtook him three laps before the end, defended the top on the last metres and won the prefinal. Stewart had to be satisfied with second position while Berkay Besler (Bouvin Power) came in on a secure third place, ahead of Edward Brand (CRG SPA) and Sam Marsh (Dan Holland Racing).
Pierce Lehane was the one to beaten in final again. The Australian driver defended the lead right after the start, but close on his heels John Stewart, Berkay Besler and Jai Nijjar (Strawberry Racing) were waiting for their chance. After a long period of ceasefire they blew for a final attack, but hindered themselves in overtaking Lehane. The latter was able to pull away some decisive metres and complemented his successful weekend by another win. Behind him John Stewart took the second place in front of Jai Nijjar which equally meant a triple win for Strawberry Racing.

Ferenc Kancsar (BirelART/KMS) managed the best start for the DD2 prefinal and pulled away from the rest of the pack. His victory never seemed in danger, until his chasers began closing the gap by halftime. Metres by metres Anthony Abbasse (Sodikart), Mats van den Brand (VPDR), Kevin Ludi (Spirit Racing), Roope Markkanen (VRT) and Henrique Baptista (Dan Holland Racing) caught up until they were in Kancsar's slip stream. But as there was only one more lap left Kancsar showed all his skills and defended his position bravely against his opponents who crossed the line in the mentioned order.
In the final Ferenc Kancsar was far away from having a walkthrough. Although he was able to lead the first laps, his opponents gave him a hard time. At first it was Mats van den Brand gaining the lead. But even his regiment did not last long. Local hero Anthony Abbasse was the one who established him self on the top by halftime, having Ferenc Kancsar, Kevin Ludi, Marcel Schirmer (RS Competition) and Mats van den Brand in his slipstream. During the rest of the laps the Frenchman did not show any weakness and so he took the win on home soil ahead of Ferenc Kancsar and Kevin Ludi who completed the podium close behind.

In the DD2 Masters classification the Russian driver Igor Mukhin (CRG S.P.A.) took the win in the prefinal, while Kawase Tomokazu (Uniq Racing Team) from Japan celebrated the victory in the decisive final. Igor Mukhin and Tamsin Germain (DG Racing) complemented the podium.

Now the ROTAX MAX Euro Challenge is already watching out for its next round. At Castelletto (ITA) one will go for the second round from 25th to 31st of May. So stay tuned on the official website www.rotaxmaxeurochallenge.com or rgmmcmedia.com, where you get all information regarding reports, photos, results and live TV stream.