Author: Vroomkart International
Crg and Maxter ready to conquer their first Wsk Trophy in 2010
WSK EURO SERIES – GENK, 9th MAY 2010
IN THE FOURTH AND LAST EVENT BUT ONE OF THE WSK IN BELGIUM, VERSTAPPEN IS ABOUT TO GET THE TITLE IN KF3 BEFORE THE END OF THE CHAMPIONSHIP. THE EVENT AT GENK WILL BE CRUCIAL FOR THONON IN KZ1, READY TO TAKE THE LEAD AGAIN. MICHELLE GATTING DEFENDS HER 3RD PLACE IN KF2.
5th May 2010. The fourth and last event but one of the Euro WSK is approaching fast. It will take place in Belgium, on the Horensbergdam Circuit at Genk from Wednesday 5th May to Sunday 9th May. GRG-Maxter is about to get the first important achievements of the season in this prestigious European series.
CRG official Team is ready to harvest the first success of the season thanks to the new star of international karting Max Verstappen, the not yet thirteen year old son of the former F1 driver Jos Verstappen, at his first experience in such an important competition and, however, after winning all the junior championships he has taken part in so far.
Verstappen is now a step away from winning his first WSK trophy in the KF3 category. So far his performance has been simply terrific: he has won five times and has arrived in second once in six races. He is now 87 points ahead of the second and 101 of the third in the general ranking. To leave Genk with their hands on the championship, Verstappen and CRG-Maxter just need to maintain 65 points of advantage over the second, namely they just need to administer the good performances they have obtained so far. 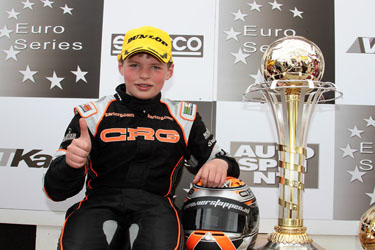 Max Verstappen, first picture and picture above,
the driver to beat in the WSK (KF3 category).


In KF3, CRG colours will be defended also by the French driver Benjamin Gérard - who has just obtained the qualification for the final phase of the European championship, just like Max Verstappen – and the young driver from Brescia Mario Ziletti.
The WSK race in Belgium is crucial for the top category with gear shift KZ1 too. The CRG-Maxter standard bearer, the Belgian driver Jonathan Thonon, must recover a disadvantage of 15 points from Lammers in the general ranking. Anyway, in this category it will probably be necessary to wait for the last race of the season at Sarno (Italy) on next 6th June. However, the Belgian driver, champion of the world for three times, feels at home at Genk, on his track: he definitely can take back the lead of the ranking.
In Super KF the CRG champions need to forget their unlucky last performances, starting from the reigning champion of the world Arnaud Kozlinski, who strongly wants to gain positions in the ranking fast as well as his team-mates Davide Forè, Felice Tiene and Eddy Tinini.
In KF2 there are great expectations for the CRG Junior Team quick Danish driver Michelle Gatting’s performance. She has been gaining momentum since the beginning of the season and now she deservedly occupies the third position in the general ranking. Gatting too has just brilliantly obtained the qualification for the European final phase, demonstrating once more to be a talented driver ready for great achievements. In the last event of the WSK in Spain, she won the pre-final and got onto the third step of the final podium, after playing a leading role during the whole race. Giovanni Martinez from Sardinia will be racing too in Belgium, in KF2 with the CRG-Maxter official team.
The programme of the WSK Euro Series on the Horensbergdam Circuit of Genk :Wednesday 5th and Thursday 6th May: from 8:20am to 06:45pm free practice.
Friday 7th May: from 8:20am to 02:05pm free practice; 03:00pm-05:10pm qualifying practice.
Saturday 8th May: 8:20am-10:00am warm-up; 10:20am-10:30am Superpole Super KF; 10:40am-06:00pm qualifying heats.
Sunday 9th May: 8:00am-9:40am warm-up; 9:50am-11:05am qualifying heats; 11:30am presentation of the drivers; 12:30pm pre-finals; 02:30pm finals and prize-giving ceremony; 04:40pm press conference.