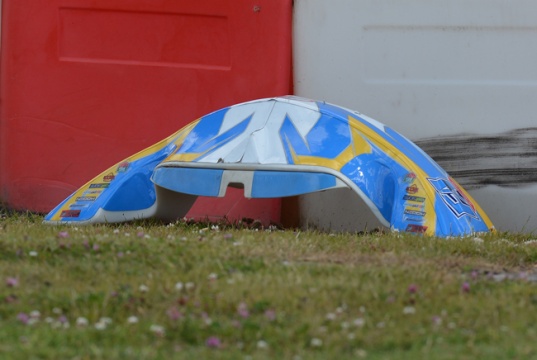 Author: Vroomkart International
As we previously reported, the CIK freezes the use of the drooping front fairings. But a solution seems to be coming soon…
"I am confident that we will be able to implement this system for all international karting events at the beginning of May 2015," said the Executive secretary of the CIK, Kay Oberheide. This is also because the first race run without the new mounting kit, the WSK at Castelletto di Branduzzo, gave the pulse of the situation, returning to a sort of Far West with many accidents and drivers "pushed out".
But how will they avoid problems with the front bumpers that, "dropped" after a collision, get stuck underneath the kart? The tendency is to return to a solution similar to the one of the first prototypes, which allowed the fairing to get dislodged without touching the surface, remaining "shaky" in its position. In this way, even when finishing off piste the problem that the front wheels are raised off the ground as a result of the bumper creeping underneath the kart should be avoided.
In this regard, Oberheide admitted: "We should reproach ourselves for not having tested this system away from the usual track, on uneven ground such as grass", after that not even in the twoexperimental races of the Academy Trophy there had been similar situations. So in a specific test already done in Castelletto they also checked the solution in case of off piste.
It seems, however, that the "ramp" with which the return of the nose is calibrated will not change - really 'too easy, also with light contacts against the kerbs - and will remain to be seen if the stewards will be able to notice a dislodged fairing when it seems they did struggle to notice one completely out of position and take action in the race ...