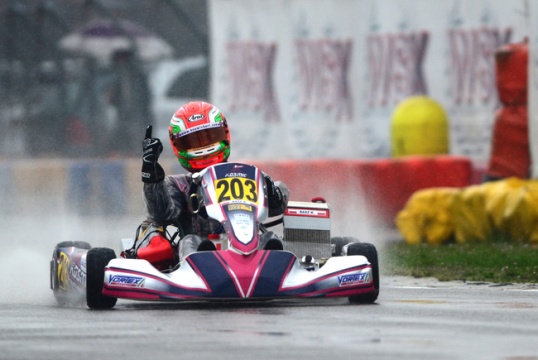 Press Release by: Kosmic
Our Racing Team’s weekend has been a true triumph at the 7 Laghi International circuit, seat of the second round of the WSK Super Master Series.
In KF class Karol Basz (https://www.facebook.com/pages/Kosmic-Kart/711535825611045) led the pre-final and the final, running on the wet track, at an unsustainable rhythm for his rivals.
Karol was aware of the excellent set-up achieved with the team and could feel a wonderful sensation in the wet conditions of the track. With this background, our driver has made two identical starts, in pre-final and final, bringing outside in the first bend on the right and by cutting the next "S" segment with determination. In both cases, the starts have managed to perfection and Basz was able to take the lead after a few meters. The sensitivity with which he ran and a perfect chassis have made the race, as mentioned, a “solo” of our driver.
We must also say that even in dry conditions, such as those on Friday and Saturday, our material was really competitive, to the point that Karol could impose in one of the heats.
The two Sunday achievements, joined to the same result in the first race of Adria, take our driver to the top of the WSK Super Master ranking, with 180 points and a substantial advantage over the most formidable opponent, Nicklas Nielsen.
Positive was Jessica Backman, who easily entered the final and ready to recover some positions in the final. Jessica, in the final was always engaged in close duels with other drivers and the twenty-first place gained enhances both her confidence in the chassis and her international experience.
KZ. The race on the 7 Laghi International Circuit saw Douglas Lundberg’s debut with our colours,  next to Andreas Backman.
Lundberg joined the team with ease and has found technical equipment of the highest level.
Both drivers have scored points in the pre-final and final, finishing in tenth and twelfth place, respectively.
It remains a little regret for a spin of Lundberg, which occurred during the final, while our driver was struggling to get into the top-five list.
KFJ. Drugovich gained very good results in the heats, managing to get an encouraging eleventh place in the ranking of penalties.
With the wet track our driver, although not resulting involved in any accident, was delayed by incidents ahead of him, and for this reason lost touch with the leaders.
Started from the fourteenth row in the final, Felipe has made a determined comeback (fourteen overtakings) on a track completely flooded, eventually gaining the thirteenth place.
Although the result is less than the potential of our Brazilian driver, it was important to have scored points for the ranking. Currently Felipe is in tenth position.
The young Weerts missed the final for a hair’s breadth, due to the tussle occurred in the middle group. The slippery track made it even more difficult the Charles’ task.