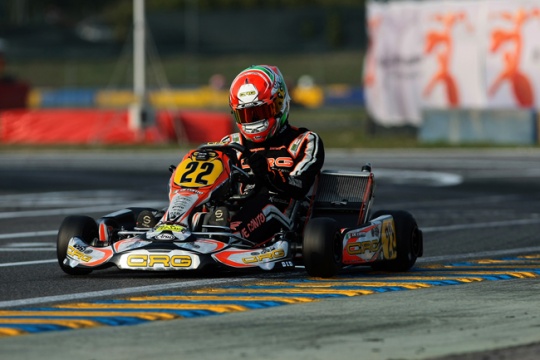 DE CONTO, FORE’ AND FEDERER AMONG THE QUICKEST IN KZ2

Great performance since the beginning for CRG thanks to the competitiveness of the combination chassis - engine and quick drivers of the likes of Paolo De Conto, who stopped the watches after 46”313s, and Davide Forè, who was just 25 thousands of a second short of him, behind the wheel.

In the second session, Pescador and Kozlinski managed to better their time by a few hundredths, which foreruns a good battle in Saturday's heats and Sunday's final stages. Two other CRG-Maxter drivers, namely Fabian Federer and Simo Puhakka managed to get close to the front runners in the second session as Federer posted the third time in 46”344s and Puhakka the sixth in 46”453s.

With these premises, all is set for another good challenge in this second round of the WSK Master Series, after the good round of Adria where CRG took a triple podium with Puhakka in KZ2, Van Leeuwen in KF and Hauger in 60 Mini.

VAN LEEUWEN TO THE FORE AGAIN IN KF

The Dutch driver Martijn Van Leeuwen of team CRG Kaijzer Racing was again under the spotlight with the third time of the third session in 47”111s, that was 57 thousands short of Fewtrell, while Dionisios Marcu was 13th in 47”426s. The quickest of CRG drivers in the second session was the German Hannes Janker of team TB Motorsport in 47”231s, while Pedro Hiltbrand was 7th in 47”392s. Felice Tiene still had a slow start in P11 (47”494s), but the Italian driver has certainly what it takes to put in a great comeback. The other CRG driver, Archie Tillett set the 13th time instead in 47”635s.

A great performance was also put in by the Malaysia's driver Muizzuddin Musyaffa Bin Abdul Gafar of team Gamoto in KF Junior, as he claimed P5 in 48”426s. Team Gamoto is also present in 60 Mini with several protagonists, among which the very young Dennis Hauger, who was third in Adria and already won the WSK Champions Cup and the WSK Gold Cup this year.