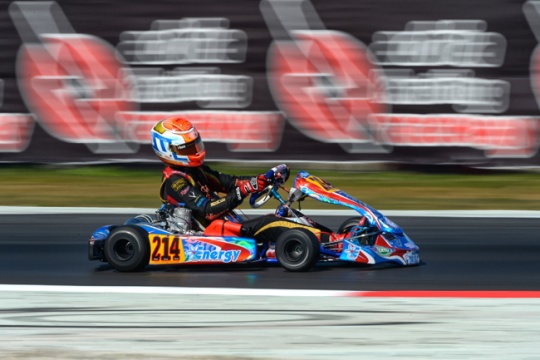 Press Release by: Energy
The 2015 karting season has just started and the Energy drivers have already made their mark in the international competitions.
Technical and human innovations abound early this year, but the qualities of Michele Panigada's team that have propelled it to the top for over 10 years are the foundation for the continued success of the Italian brand at the highest level.

Recently homologated, the 2015 Energy chassis is again well-designed to enable drivers to take top billing and to continue to add to the prestigious list of results. The hard work of the entire team, whose professionalism is widely recognized, its undeniable technical expertise, combined with a human framework and careful oversight, ensure the enviable position of Energy Corse among the greatest teams in international karting.

"As with every start of the season, the drivers need to assimilate the new parameters of competition," says Michele Panigada. "The 2015 line-up has no shortage of new blood as in addition to newcomers, in KF we have drivers who have taken the plunge from KF-Junior. I also want to say that our collaboration with the young Petr Ptacek has been very positive. Various reasons, such as leaving the Lotus F1 Junior Team, explained his change of direction, but the deal has always been excellent between the two parties."

Juan Correa and Rokas Baciuska have performed very well at the wheels of their Energy-TMs for their debut in KF. Bacisuka focused on achieving a promising 5th place in the final of the WSK Champions Cup at La Conca, while Correa finished eighth in the championship. The American finished the Winter Cup at Lonato in 7th, while the Lithuanian recovered strongly close to the top 10. The potential is there for his talents, which are just waiting to be confirmed in future competitions.

In KF-Junior, the Spaniard David Vidales has already showed interesting progress by finishing 7th in the WSK Gold Cup and 6th in the WSK Super Master Series at Adria, while the Dane Frederik Vesti had been prominent earlier at La Conca. The Slovak Dominik Goldschmied is learning the fundamentals of the category quickly and should soon join his teammates in the top rankings.

Hope also comes from the youngest drivers with good scores achieved in 60 Mini from Mattia Michelotto and Mattia Muller who took a double victory at Adria in the WSK Super Master Series, as well as Francesco Crescente, who was 4th in the Winter Cup in Mini Rok.

Energy chassis are also very competitive in other categories, as evidenced by the excellent 3rd place finish in DD2 for Oriol Dalmau, an Energy Spain driver, at the Rotax Winter Cup at Campillos and in the triumph for Christian Brooks - NASH Motorsportz - in the SKUSA California Prokart Challenge at Willow Kart where he won both heats and the final in TaG Senior.

Everything looks very good for Energy Corse in 2015. The team will expand further for the important events that are coming soon: WSK Super Master Series and the CIK-FIA European Championship. Innovations are certain throughout the season, such as the new KF front brakes, which are lighter and more efficient, recently tested by Correa at Adria.