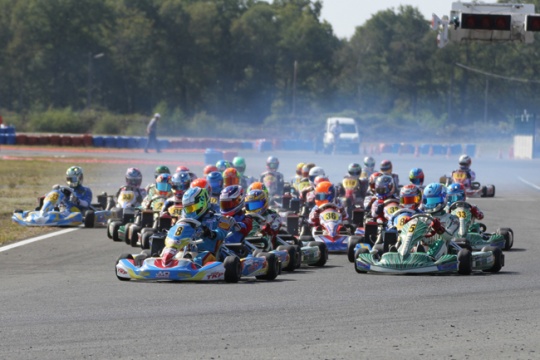 Press Release by: RGMMC
Finally waiting is over: From 30th of March to 5th of April 2015 the ROTAX MAX Euro Challenge will hold its 2015 opening event in France.
The 1.500 metres long circuit of Sologne Karting marks the first stop of the year. Over 160 drivers from 33 countries representing every continent entered the opening round in order to compete in the most unique European ROTAX series.

In mid-February the ROTAX Winter Cup has already proved to be an action loaded and thrilling foretaste of what the Euro Challenge season will be like. But the first rehearsal will even be trumped by the opening round of the ROTAX MAX Euro Challenge at Salbris. On French soil Roland Geidel and his RGMMC team – consisting of over 30 experts from all across Europe – are best prepared to maintain the high level of race organisation which is not only popular for its professional standards and processes but based on love, passion, commitment and an unbroken pursuit of innovation and advancement.

Compared to last year the 2015 championship schedule includes some adjustments an novelties: This season the tour starts in Salbris (FRA) from 30th of March to 5th of April, followed by the second stop on the Italian track "7 Laghi" in Castelletto (ITA) from 25th May to 31st of May. For the summer race the Euro Challenge will give its comeback in Germany on the beautiful and modern track of the Prokart Raceland. Equally the event at Wackersdorf will kick off the second halftime from 20th to 26th of July, before Genk (BEL) will host the final round from 31st August to 6th of September.

Having a look in the different categories one finds jam-packed grids in each class. About 60 junior drivers will compete at Salbris, fighting for the first points of the season. One who has recently proved his talent is Tom Gamble (Dan Holland Racing). The Winter Cup winner aims to tie in with his latest success. Yet he has to deal with some experienced opponents: Dean MacDonald (Strawberry Racing) for instance looks back on a brilliant 2014 season, which he finished third in the European championship. Surely the UK driver wants to go for the title this year. His fellow countryman Alex Quinn belongs to the circle of favourites, too. Having switched to CRG SPA for 2015 he is fully motivated to assert himself on the top. But maybe one will see a big surprise in the end as one of the many newcomers is going to make an impact.

Just like their younger colleagues the seniors will present a crowded grid within the Euro Challenge framework. According to experience, the senior category does not only impress by its quantity. The level of competition has always been extremely high and 2015 won't be an exception. Former juniors, such as the reigning junior champion Thomas Preining from Austria and Dutchman Richard Verschoor (both Team TKP), will stand their ground, challenging the established senior drivers. The man to be beaten will be title defender Harry Webb from the UK. But the multiple champion still has to acclimate with his new team of CRG SPA, which applies to his teammate Edward Brand who completes the spearhead for CRG in 2015. Highly motivated is the squad of Strawberry Racing. The successful team from the UK is best prepared: Australia's Pierce Lehane already gave a foretaste of what he and his team are capable of. At the Winter Cup at Campillos this combination celebrated an impressive double win. The listing of favourites could go on endlessly but finally we have to wait and see what the season start really comes up with.

Last but not least the DD2 category promises some prominent and elitist action. Over 40 drivers make for a well-stocked grid, which consists of the best drivers of ROTAX gearbox karting. Everyone seeks for the succession of last year's champion Ben Cooper who will not defend his title in 2015. Best chances can be attested to Hungary's Ferenc Kancsar (BirelART/KMS) who underlined his skills by his latest success at the Winter Cup race. But he will be given a hard time for sure. Especially
Frenchman Anthony Abbasse (Sodikart) wants to impress on home soil and the CRG manufacturer drivers Paolo de Conto from Italy and Luka Kamali from Germany are in best shape too, making for some surprising twists in the end.

All told one can expect an exciting 2015 season. The twelfth year of the ROTAX MAX Euro Challenge promises a highly balanced level of competition and most thrilling race action in each category. At last Salbris will unveil the first pacemakers and everyone is invited to join the event by following the live timing or the live stream. So stay tuned on www.rotaxmaxeurochallenge.com and www.rgmmcmedia.com