Author: Vroomkart International
May cover is all for the great show in Sarno at the CIK-FIA European KZ1-KZ2 Championships. In the most crowded class, KZ2, Energy drivers stand at the top with a brilliant trio of drivers – De Conto, Jeleniowski and Leijtens – led by the Italian driver. KZ1 suffers the lack of three major manufacturers, but Lammers and Iglesias do all they can to relegate the issue to the sidelines with an exciting performance. Also, we feature a long-awaited, revealing interview with CIK President Nicolas Deschaux, a fantastic Maxter KF vs KZ engine track test, Rotax Euro Challenge opener, and much more. 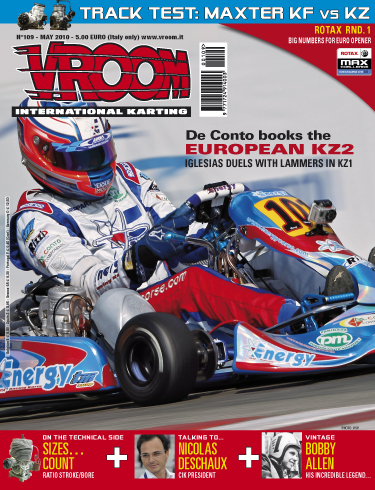 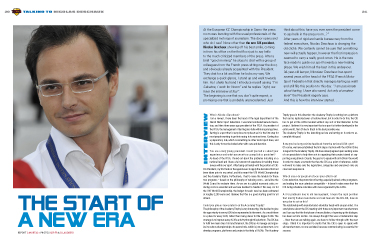 TALKING TO – Nicolas Deschaux
After years of rigid and senile bureaucracy from the federal executives, Nicolas Deschaux is changing the old cliché. He is the new face ready to guide our sport towards a new healing phase. 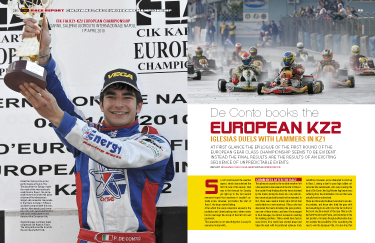 RACE REPORT - CIK-FIA KZ1-KZ2 European Championship
At first glance the epilogue of the first round of the European gear class championship seems to be evident. Instead the final results are the results of an exciting sequence of unpredictable events. 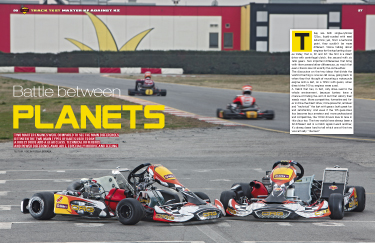 TRACK TEST - Maxter KF vs KZ
Two Maxter engines were compared to see the main differences between the two main types of karts used today: a direct drive and a gear class. Technical difference and power difference available, especially in drive and feeling. 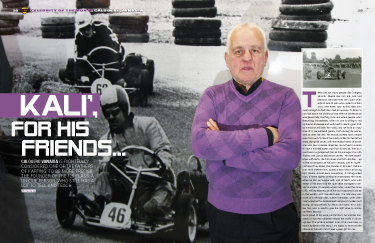 CELEBRITY OF THE MONTH - Calogero Vanaria
Calogero Vanaria is rightfully considered one of the fathers of karting, to be more precise, the founder of the 125 class. A unique person, who still has a lot to tell and teach… 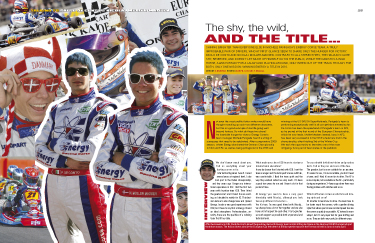 TALKING TO - Paolo De Conto & Nicolaj Moller-Madsen
Shining brighter than everyone else in Michele Panigada’s Energy Corse team, a truly improbable pair of drivers, who at first glance seem to share only the hunger for victory: Paolo De Conto and Nicolaj Moller-Madsen. Contrary to all stereotypes, the Italian is quite shy, reserved, and doesn’t let much of himself out in the public, while the Danish is a wild horse, always ready for a laugh and playing around, only when out of the track though. For both, only one mission: winning Energy a title in 2010. 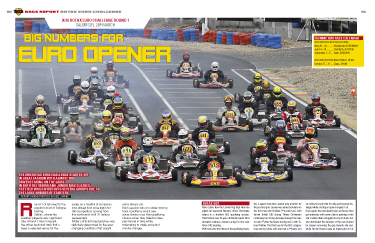 RACE REPORT - Rotax Euro Challenge
The 2010 Rotax Euro Challenge started off in great fashion with almost 200 drivers taking on the grids. In both the Senior and Junior Max classes, the field was divided into several groups due to the large number of starters. 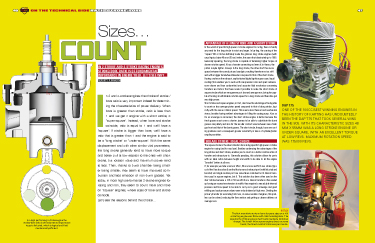 ON THE TECHNICAL SIDE - Ratio stroke/bore
In 2-stroke and 4-stroke racing engines, stroke/bore ratio is of fundamental importance in engine yield. Let’s see why… 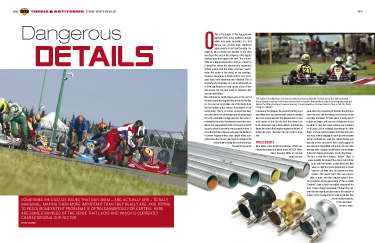 THESIS & ANTITHESIS - The details
Sometimes we discuss issues that may seem – and actually are – totally marginal, making them more important than they really are. And trying to resolve inexistent problems is often dangerous for karting. Here are some examples of the sense that lacks and which is currently characterizing our sector. 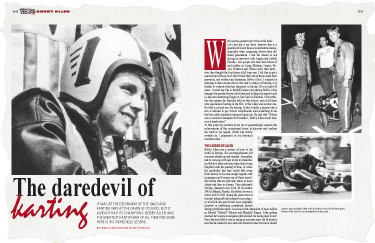 VINTAGE – Bobby Allen
It was at the beginning of the 1960’s and karting was at the dawn of its days, but it already had its champions. Bobby Allen was the greatest kart driver of all time for some. here is his incredible legend… 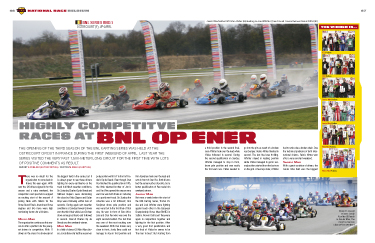 NATIONAL RACES
Some great racing also on this issue from national championships. We start reporting from Belgium’s BNL Series round 1, with the usual four-finals format to crown the weekend’s champions. Next on the list, two big events from Denmark with the SuperKart Championship and the national Rotax series. From Portugal, we feature the Master Cup and Baltar Cup with many new drivers hitting the starting grids. Japan SKF championship kicked off in the famous circuit of Motegi; and Thailand season is also off with the Thai National Championship and Thai Open Series at Bira.


COLUMNS – Mondokart & June national and international calendar
The news section opener is dedicated to CIK communication. At CIK they’ve done some maths to show the real costs of the new ‘U18’ World Championship. Also, the British SuperOne Series and the Swiss Championship debut with some exciting racing. And Formula BMW Europe wrapped up the pre-season testing in Zandvoort. The last page is dedicated to the national and international racing calendar featuring June events. 62 races from 24 countries across the world, plus 5 major international events.