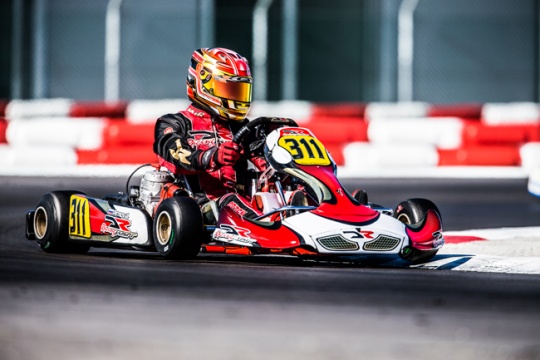 Press Release by: DR Racing Kart
Danilo Rossi’s team builds on the positive performance shown in the Gold Cup to hit a solid podium in KFJ with fast Russian Artem Petrov.
The KFJ weekend of the WSK Super Master Series started as the previous one for the Gold Cup ended – with DR Racing team powered by Tm engines in the leading group. After a good free practice session, Petrov proved that the pace shown at the WSK Gold Cup only one week earlier – and in the Champions Cup at the beginning of February – was not chance.
After stopping the 6th fastest time in qualifying, the Russian went on to win two heats and finish 3rd in the remaining two, to start Prefinal B from pole. A blistering start did help Petrov to keep the lead at the green lights, but on lap 2 he was taken by Sargeant for the lead as he cautiously stayed in the leader’s wake for a few of laps.
With the top-2 unable to break from the pack, a third contender challenged for the lead moving past half way through the race. The young DR driver knew that 2nd place would have meant inside row 2 start in the final, and with 7 laps to go sneaked through to shadow the leader, never able to make the decisive move for the win, despite stopping the second fastest lap of the race, 4/100 faster than the final winner.
A great start in the final meant that Petrov was able to challenge for P2, keeping the position for 4 laps. However, the superior pace shown in the prefinal proved not as brilliant, and the Russian had to be content with 3rd at the flag, less than 0”05 from P2 and over 2.5” ahead of the chasing group.

A few contacts hindered the weekend of the other DR Racing drivers, with only Lithuanian Justas Jonusis actually making it to the final, which he closed in P26 from 34th on starting grid. Travnikov, Altoé and Herencia will definitely make use of the experience gained in Adria to reach the final stages already in the next round in Castelletto.


Danilo Rossi (Team Principal)
“The podium is the just reward for our efforts. Congratulations to Petrov, he did really well to get DR Racing its first podium of the season, also showing to have what it takes to climb to the top.”