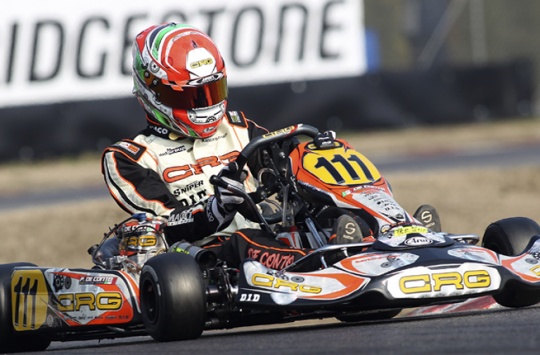 Press Release by: CRG
CRG works team is heading to Adria with its drivers ready for the challenge of the first of the four rounds of the WSK Super Master Series. Particularly awaited are the KZ2 race and that of KF. In 60 Mini, Hauger is all set to repeat the success obtained in the WSK Gold Cup and WSK Champions Cup.
Following the season debuts and some very good indications obtained so far, CRG works team is getting ready to compete in the first championship of the year. The WSK Super Master Series will run its first round at the new circuit of Adria International Raceway in the weekend of 6-8 March 2015.

A GOOD CHALLENGE IN KZ2

The KZ2 round will have almost 50 drivers on track among which the strongest racers in the world and CRG will bring its new chassis pushed by Maxter. The CRG lot will be led by Paolo De Conto, who won the Prefinal at the recent Winter Cup and has been great protagonist in the debut race of this season. Davide Forè will be quite motivated to get a good result, while Fabian Federer will be back among the ranks of CRG after the participation at the Winter Cup with Maranello. The team's lineup will be completed by two new entries: Simo Puhakka and the young Fabrizio Rosati.

The European KZ2 champion Andrea Dalè, will also race on CRG chassis pushed by Maxter engine, while Riccardo Negro, who won the WSK Euro Series in 2013, will debut on CRG-Tm run by Renda Motorsport.

HUNTING FOR THE PODIUM ALSO IN KF

Category KF will also be full of champions as CRG works team will field a quick driver like Felice Tiene, who did not miss out on the podium in the recent Winter Cup. He will be racing alongside some other talented drivers of the likes of the Spaniard Pedro Hiltbrand, the Romanian Dionisios Marcu and the British Archie Tillett, who has been at ease since the beginning in the higher category.

The Dutch team CRG Keijzer Racing will take on track the quick Martijn Van Leeuwen, who obtained a great P3 a few days ago in Adria at the WSK Gold Cup. Among the private teams, German team TB Motorsport will field Hannes Janker and Tom Lautenschlager.

CRG will also be represented by team CRG Keijzer Racing in KF Junior with the Dutch driver Bard Verkroost and by team Gamoto with the Malaysian Muizzuddin Musyaffa Bin Abdul Gafar.

HAUGER MOTIVATED TO REPEAT THE SUCCESS IN  60 MINI

Category 60 Mini will be particularly interesting too, as CRG drivers will be represented by team Gamoto that will line up a lot of very young drivers starting from the recent dominator of WSK Gold


Cup of Adria and WSK Champions Cup: the ever stronger Norwegian Dennis Hauger,  Leonardo Marseglia, third in the same race in Adria, and then Cenyu Han, Adam Putera, Souleimane Zanfari, Luca Griggs. Mathias Torreggiani of Elto Racing will also be racing with CRG colors as Max Burkinshaw of AB Motorsport.

All results, Live Timing and Live Streaming will be available in the website www.wsk.it