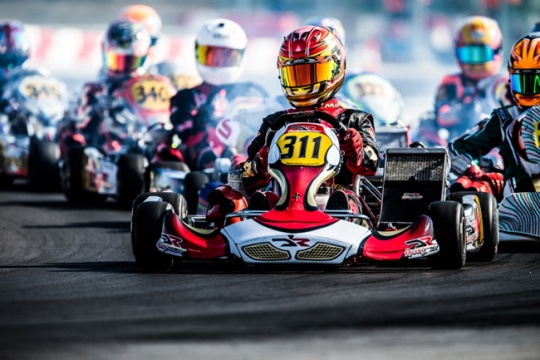 Press Release by: DR Racing Kart
As many as six drivers took on the KFJ grids with DR Racing Team at Adria International Raceway for the WSK Gold Cup. With five out of six making it to the final, and two making it to the top-5, the Italian weekend did smile at Danilo Rossi’s outfit.
The two major contenders in KFJ proved to be Russian duo Artem Petrov and Zahar Slutskiy. Both powered by Tm engines, Petrov and Slutskiy did put a show in the heats, after Petrov stopped the 3rd fastest time in qualifying. The young star went on to grab a win and three 2nd places in the heats to start his prefinal from the outside front row. Slutskiy did just as well, taking a 2nd (and fastest lap with 49”826), a 3rd, a 4th and a 5th to start his prefinal from P3.
But if Slutskiy managed to keep his position all the way to the chequered flag after a first lap scrap, Petrov dropped down to 4th with two laps to go after having fought for the win until then.

The two-prefinal system meant that Slutskiy had to start the final from 4th and Petrov from 7th. And the Russian duo did not disappoint expectations. After proving always among the fastest, the two move up a couple of position already in the first lap, with Petrov moving past his teammate for 4th in the following lap. With the leader well away to over 1” advantage on the chasing group by lap 8, and Petrov having had his turn to P2 in the early phases of the race, the fight for the podium position was full on. Pass and counter-pass, the final turned out to be a nail-biting one, and by the last lap Petrov tried to make a final dash at the last step of the podium only to come a few tenths shy, with Slutskiy inheriting 5th after a few rivals were handed penalties.

Good effort also by Altoé with a 3rd and a 8th in the heats but stuck in the traffic in both prefinal and final; the other Slutskiy brother, Artem, with a consistent comeback both in prefinal and final; and debuting Lithuanian driver Jonusis, capable of making it to the final despite a string of difficult heats. Also Spaniard Oscar Herencia, at his international debut, put some fundamental mileage for what is going to be an extremely intense racing season.


Danilo Rossi (Team Principal)
“I’m quite happy about our first race of the season. All of our six drivers did well, particularly Zahar Slutskiy and Artem Petrov who went very close to step on the podium in the final. We showed our high performance level consistently throughout the weekend, and we are ready to challenge for the victory already in the next race, where we will have two additional drivers in our line-up.”