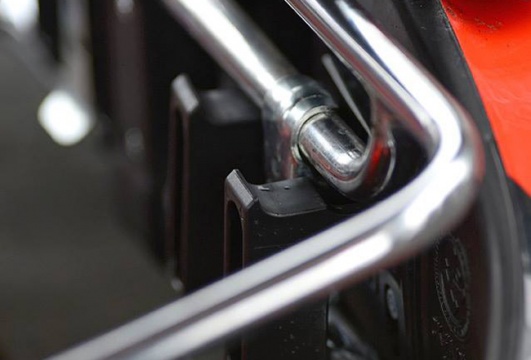 Press Release by: FIA Karting
From the first Competitions of the season, the new front fairing complying with the 2015 CIK-FIA Regulations has changed drivers behaviour, encouraging them to gradually adopt more respectful driving techniques.
The results are already dramatic. By limiting rough passing manoeuvres, this simple system makes Karting more sporting.
With today's karts, some drivers have developed bad habits, not hesitating to hit their opponents to gain an advantage. Over time, contact between karts has reached an unacceptable level for the smooth running of Competitions. The CIK-FIA has decided to react by researching different solutions with its technical partners. This is what was implemented on 1st January 2015, a simple and economic system which tilts the front fairing to the ground without detaching it, when there is a significant impact. Any Driver returning to the parc ferme at the end of a Qualifying Heat, a Prefinal or Final with a dropped front fairing is systematically penalised 30 seconds.
The positive consequences of this new regulation have not been long in coming. Once past the discovery phase, Drivers have adapted their driving to the new system. The first international Competitions of the 2015 season allowed the benefits to be measured. There were less unwanted stampedes at the start, and respect from everyone helped to significantly reduce the handicap of starting from the outside line. Massive clashes that were frequent until now at the first corner are in the past. All Drivers now have the best chance to complete the first lap calmly and then to demonstrate their driving talent up to the chequered flag without fearing a dangerous manoeuvre.
The new front fairing attachment is still in its infancy, but has already convinced most of the drivers and team leaders. Here are some significant testimonies, recently collected from experienced professionals.
Paul Fletcher, owner of the PF Int'l circuit and a leading figure in British Karting: "I am very impressed by the effectiveness of the new front fairing fasteners. They unquestionably encourage good starts without clashes at the first corner. I hope this finally marks the return of respect on the track! I support the implementation of the new regulation as soon as possible in Britain."
Olivier Maréchal, head of the Kosmic Racing Department: "We had to do something to fight against aggressiveness on track. The new front fairing fixings fulfil this mission. We have already seen a significant change in the progress of the races which is very positive."
Ricky Flynn, head of Ricky Flynn Motorsport: "Drivers have quickly realized that it is now necessary to prevent contact. It's great to watch fair starts. We should soon see respect between the drivers that has been lost for some time. We must continue on this path."
The CIK-FIA is aware that the current system is not totally perfect, but does perfection exist? Its use in Competition is being watched very closely and reflection is continuing to improve effectiveness, which also requires drivers to learn.